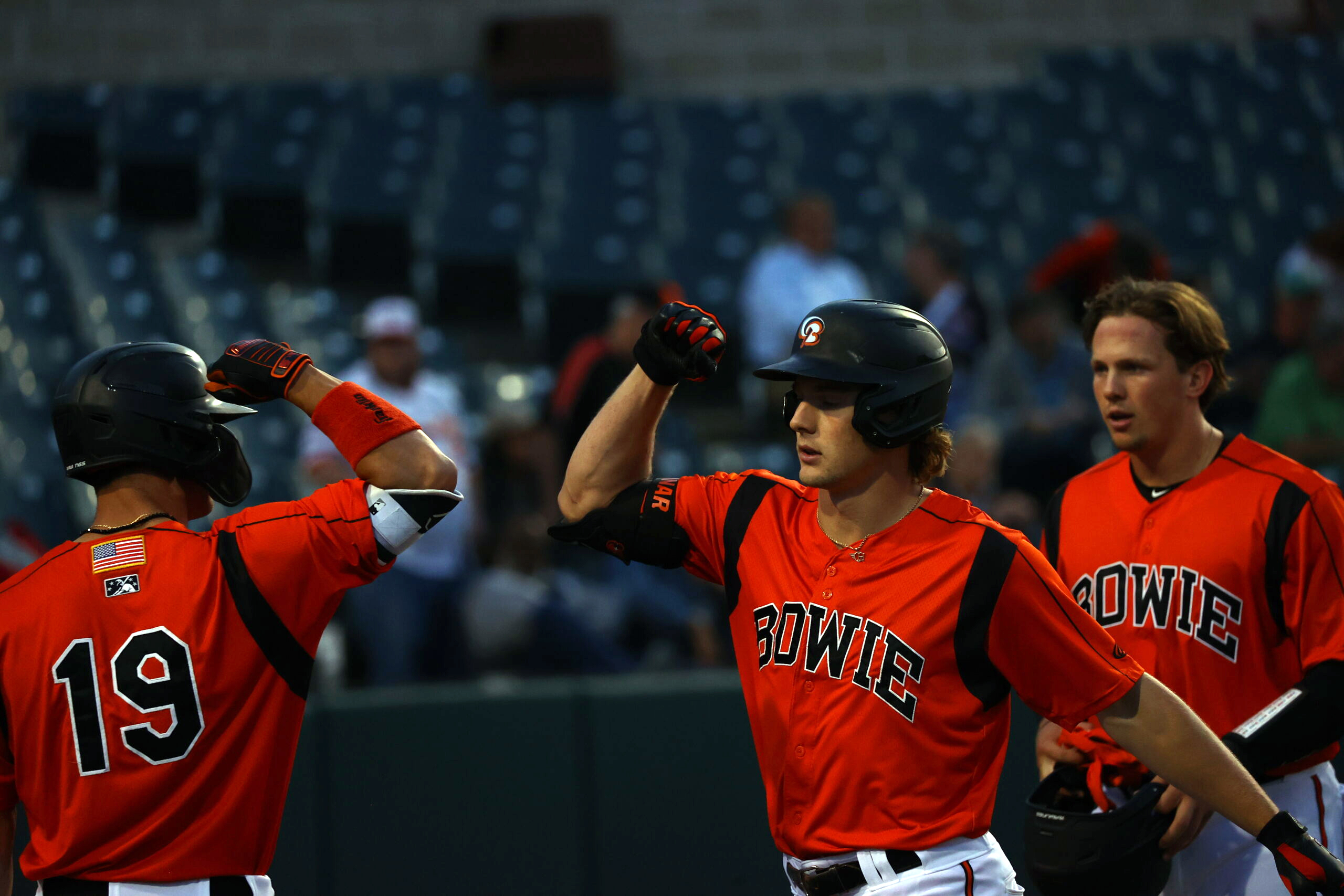 It was “Cowboy Night” in Bowie and Gunnar Henderson was wearing his Stetson and boots before the game. The 20-year-old has been like Billy the Kid at the top of the Baysox lineup.

“I feel like it’s been beneficial just getting the experience of getting to play every day and just really working on my routine and learning from guys like Adley [Rutschman] and everybody in the alt site,” Henderson said. “Just seeing the big league guys come up and down. Just seeing their routines and working with them has really helped me learn how to play the game the right way.”

Henderson is slashing .291./450./.988 with seven home runs and 26 RBIs in 36 games for Bowie. Don’t expect him to be with the Baysox all summer. Henderson appears to be on the fast track to Triple-A Norfolk.

“Gunnar, I think in particular, the walk-to-strikeout ratio with the power he is showing is very intriguing,” said Mike Elias, Orioles’ executive vice president/general manager. “We took him at 17 years old from a small part of Alabama. He played a lot of basketball in high school. He was going to be a sort of player development project when we got him. He’s been a flagship aspect of what our player development group is doing on the hitting side.

“He’s done a lot of work to improve his swing mechanics since he’s been here and he’s rapidly physically and mentally maturing. He’s 20 years old and he’s starting to turn into an adult. It’s awesome to see the start that he’s having in Double-A. …  I’m very hopeful he won’t finish the year in Double-A. But he has to stay healthy and all of that good stuff.”

Henderson worked hard in the offseason to get stronger. He also worked on his defense after committing 30 errors last season, playing shortstop and third base. This year, he has made five.

“I’ve been really working on my fielding and throwing,” Henderson said. “I know that was a little bit of an issue last year, but I’ve cleaned it up. It’s been paying off.”

Henderson was selected by the Orioles in the second round (No. 42 overall) of the 2019 draft.

He finished the year ranked as the Orioles’ No 4 prospect, according to MLB Pipeline.

“I’m still 20 so I take it day by day,” Henderson said. “Go out there, have fun and learn as much as I can. That’s what the minor leagues are for, to learn and get experiences.”

Bowie manager Kyle Moore has seen Henderson develop over the past two seasons; he managed him at Aberdeen last year. He has been impressed with his progress and his maturity.

“He’s a really productive offensive player,” Moore said. “He’s far past the maturity level than we thought he was coming into spring training. I thought this was going to be a bit of a push to get him to succeed here but he’s exceeded all of our expectations. He’s certainly physically ready. Having a really good offseason set him up for the season he’s having. He’s excelling and he has great numbers in every category. He’s at the top of our lineup in the two-hole for a reason every night.”

Henderson enjoys the camaraderie among the players. Bowie (14-23) is scuffling after losing nine of 10, but he is also confident the team will turn things around.

“It’s an awesome group to be with,” Henderson said. “Everybody has such a good head on their shoulders and good heart. It’s really been fun, and I can’t wait to see what we can do in the future.”

Rodriguez shining: With the promotion of top prospect Adley Rutschman on Saturday, fans are eager for top pitching prospect Grayson Rodriguez to make his MLB debut in the near future. In his Sunday start for Norfolk, Rodriguez allowed two runs on four hits, struck out nine and walked one in 6 innings in a 14-3 victory over Charlotte.

Elias was non-committal about the potential promotion of Rodriguez, but he has been impressed by his performance.

“I think that there are a number of factors that we’re monitoring with Grayson,” Elias said. “First of all, it was a condensed major league camp because of the lockout. He wasn’t locked out, but it wasn’t a camp where we could let him have maybe the normal number of innings he could have because we were trying to put a team together so quickly.”

Stowers breaking out: After some early struggles, centerfielder Kyle Stowers is finding his swing for Norfolk. Stowers hit three home runs and drove in five runs in the 14-3 victory over Charlotte on Sunday. Stowers is batting .259 with nine homers and 23 RBIs this season.

Aberdeen piling up victories: The IronBirds are 26-11 and have the best record in minor league baseball through 35 games.  Aberdeen has five players ranked among the Orioles’ top 30 prospects on MLBPipeline.com — outfielder Colton Cowser (No. 4), infielder Coby Mayo (No. 7), infielder Connor Norby (No. 11), infielder César Prieto (No. 12) and outfielder John Rhodes (No. 23). All could earn promotions to Bowie in the coming weeks.