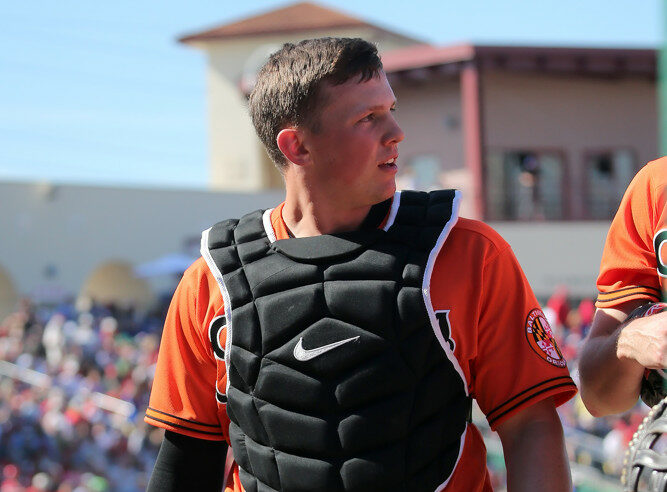 It probably should have been obvious that something was cooking when top Orioles prospect Adley Rutschman was not in the lineup for the Triple-A Norfolk Tides on Friday night, but the O’s have become pretty good at keeping secrets.

The long-awaited announcement of Rutschman’s big-league promotion came early Saturday morning, leaving plenty of time for non-horse racing fans to change their plans and grab some tickets for tonight’s game against the Tampa Bay Rays. And who would have guessed that the rebuilding Orioles would be in a position to upstage the Preakness?

But coming on the heels of consecutive walk-off victories over the top two teams in the American League East has created an environment for what now promises to be one of the most upbeat Baltimore baseball weekends in quite a long time.

Rutschman presumably will be in the starting lineup for the second game of the series against the division’s second-place team on the night after the Orioles snapped a 15-game losing streak against the Rays with their heart-stopping 8-6 victory on Friday.

There had been a great deal of speculation that Rutschman would be called up for the series opener and it was clear on social media that fans were growing increasingly impatient with the conservative approach the Orioles were taking with their most anticipated prospect since Matt Wieters or Manny Machado or maybe even college pitching legend Ben McDonald.

Trouble is, there’s no real blueprint for this sort of thing. The Royals had already brought up 21-year-old Bobby Witt Jr., who was drafted immediately after the Orioles made Rutschman the No. 1 overall pick in the 2019 draft. Seattle Mariners top prospect Julio Rodriguez was in the major league starting lineup on Opening Day and he’s three months younger than Witt.

There are other such examples, a couple of whom have been sent back down, but it was not unfair to question why a guy who turned 24 right before spring training could be any less ready for the majors than several players much younger.

There were reasons, most notably the fact that Rutschman was hurt for almost all of this year’s lockout-shortened spring training and needed all this time to get ready to be an everyday player in the major leagues.

Executive vice president/general manager Mike Elias contended all along that Rutschman would come up when the club felt he was ready and that would be the only criterion for the timing of his ascension to the major leagues. Still, there was room to wonder whether the team was slow-playing his arrival because of the unexpected success of the pitching staff under the tutelage of veteran catchers Robinson Chirinos and Anthony Bemboom, but manager Brandon Hyde firmly dismissed that theory before Friday night’s game.

“I’m really happy with our catching situation,’’ Hyde said. “Robbie … Bemboom … they’ve done an amazing job with our pitching staff, but the decision with Adley is going to be about Adley. They will call him up when they feel like he’s ready. It has nothing to do with what our guys are doing behind the plate because they are doing an absolutely fantastic job handling our pitchers. We’re extremely pleased with both guys. Unbelievably professional.”

Obviously, one of them would have to go to make room for Rutschman and it was equally obvious it would be Bemboom, who was designated for assignment and could be claimed off waivers by another team. If no club picks him up, it is believed the Orioles will attempt to outright him to the Norfolk Tides roster.

Hyde said Friday he was eager for Rutschman to get here but knew that day would be bittersweet because he’d have to take a job away from someone who has been doing everything he could ask for behind the plate.

Now, Hyde’s focus shifts to making sure that Rutschman is able to handle the demands of regular work behind the plate at the sport’s highest level while trying to live up to what could be unrealistic expectations for his rookie season.

To be fair, comparisons with the younger stars who already are playing regularly at the big league level are problematic, since the likes of Witt Jr., Rodriguez and Spencer Torkelson – all of whom play field positions – do not face the kind of the learning curve required for the development of a premier catcher.

Team officials had been reluctant to set specific conditions for Rutschman’s call-up, but they have made it fairly clear that they want him to be ready to play regularly (loosely translated, four or five games per week) when he arrives. Entering Friday’s night off, he had caught six Triple-A games over the previous eight days, which would seem to meet that unspoken but presumed standard.