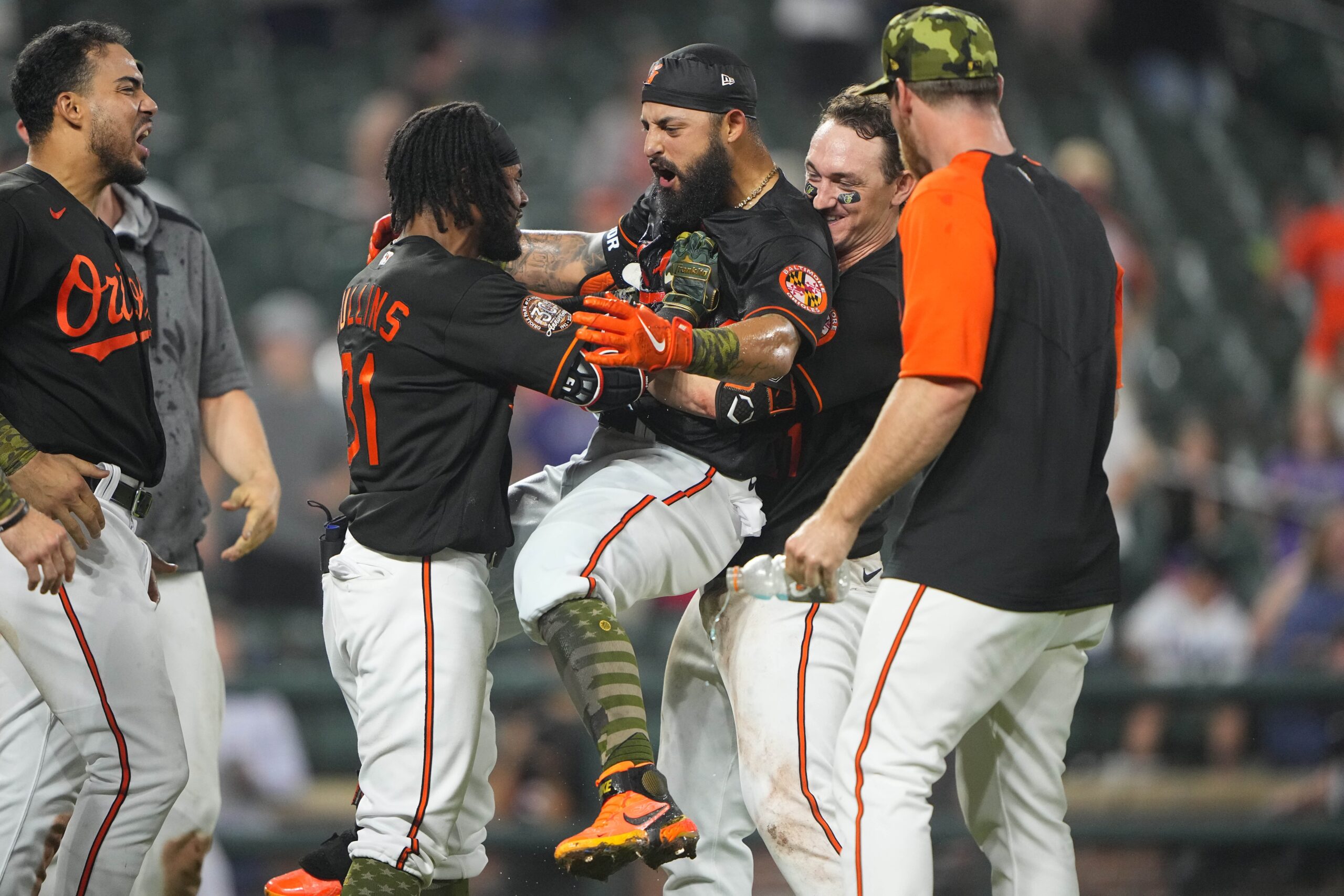 BALTIMORE—After tying their wild game with the Tampa Bay Rays at 3-all in the seventh, at 5 in the 10th, and 6 in the 11th, the Orioles finally broke their 15-game losing streak against Tampa Bay. It took until the 13th inning, and Rougned Odor ended the Orioles’ longest game since September 23rd, 2019 with a two-run home run for an 8-6 win before an announced crowd of 15,127 at Camden Yards on Friday night.

It was the Orioles’ second straight walk-off win, following their 9-6 victory over the Yankees on Thursday that ended on an Anthony Santander three-run homer in the bottom of the ninth. Odor gave Santander the Gatorade splash at the plate on Thursday. Santander returned the favor on Friday night.

Odor didn’t enter the game until he struck out as a pinch-hitter in the the 11th. In a season in which he’s hitting just .210, he slammed the no-doubt game-winner onto the flag court off Ralph Garza Jr. (0-1).

“I was just ready,” Odor said. “They need me and, thank God, I was ready to go when they need me.”

Manager Brandon Hyde has been complimentary of Odor, whose enthusiasm isn’t affected by his average.

“When he isn’t in the starting lineup, he stays ready throughout,” Hyde said. “I think he looks for that big moment. I know he cherishes it.”

Left-hander Nick Vespi (1-0) pitched two scoreless innings for the win in his major league debut, including the 13th, when it appeared the Rays had taken the lead again. Kevin Kiermaier singled to left with two out, and Wander Franco, who was the automatic runner at second, was called safe after an outstanding throw from Austin Hays in left field.

The Orioles (16-24) looked at the replay on the scoreboard and began walking off the field. Franco didn’t slide and was tagged on the leg by catcher Anthony Bemboom before he touched home.

Bemboom, who caught the last two innings, told Vespi he made the tag.

“He was like, ‘We’re going to get out of this inning, I tagged him before he touched home,’” Vespi said.

“I’m super excited, I’m so numb. I’m happy my parents were able to see this.”

Tyler Wells held the Rays (23-16) hitless through the first four innings, allowing only a walk to Franco with one out in the fifth. After retiring 11 straight, Randy Arozarena grounded sharply to shortstop Jorge Mateo, who threw wildly to first. Isaac Parades walked with one out, and Mike Zunino homered high off the left-field foul pole, his fourth of the season, to give Tampa Bay a 3-0 lead.

“I’m going to be honest with you, I didn’t like the way it was trending at all,” Wells said. “That was probably the worst I felt on a major league mound.”

After Wells struck out Brett Phillips and had gone through the Rays’ order twice, Logan Gillaspie replaced him. Wells allowed three runs on two hits in 4 2/3 innings, walking two and striking out four.

In the fifth, Chris Owings doubled with two outs and tried to score on a single by Cedric Mullins to right but was thrown out at the plate by Phillips.

Arozarena led off the seventh with a popup that dropped in left field. Mateo ran into left, retrieved it, and threw to Owings at second in time to tag Arozarena.

The Orioles tied the score at 3 when Tampa Bay had an uncharacteristic sloppy inning.

Tyler Nevin led off with a double. After a single by Ramón Urías, Brooks Raley replaced Yarbrough. Nevin scored on a wild pitch, and catcher Robinson Chirinos’ fly to left was dropped by Arozarena, allowing Urías to score. Raley hit Owings with a pitch. After Mullins flied to center, J.P. Feyerheisen retired Hays on a fly to left. But Trey Mancini singled to score Chirinos, and the score was tied.

Oriole reliever Keegan Akin threw a solid 2 1/3 innings and yielded to Bryan Baker with two outs in the ninth.

With the game tied at 3, Taylor Walls was the automatic runner at second as the 10th inning began. With one out, Phillips doubled against Baker and Yandy Diaz singled to score Phillips.

Matt Wisler blew a chance to save it when he allowed two runs to the Orioles in the 10th. Remarkably, he didn’t allow more.

Mullins was the automatic runner. Hays and Mancini walked to load the bases. Santander tied it at 5 with a two-run single to right.

Ryan McKenna, who ran for Mancini, held at third on a grounder by Mateo that was fielded by Walls. But McKenna went on contact on a ground ball by Nevin to Franco at shortstop and was tagged out at the plate..Urias flied to center, and it was on to the 11th.

“We blew a chance there with second and third and nobody out,” Hyde said. “A lot of times when that happens, there’s a deflation that happens throughout the dugout. It’s like, ‘That was our chance,’ and when you blow that, a lot of times, it’s natural to feel it’s not going to happen tonight. I’m really happy with our guys, the way they bounced back after that.”

Kiermaier’s one-out single scored Vidal Bruján, the automatic runner in the 11th, and the Rays took a 6-5 lead.

Hays came through with an RBI single to tie it at 6 in the bottom of the 11th.

“I feel like there was something different every inning,” Hyde said. “There are so many things that come into play with a runner on second base and nobody out.”

Hyde said he had to call on pitchers he didn’t want to use. Baker worked consecutive games. Dillon Tate and Cionel Pérez worked in three of the last four games.

“Those guys, even though they gave up a few runs late, they kept us in the game,” he said. “In those extra innings, you never know what to expect. I was really happy with how our guys took really good at-bats off really tough relievers from them.”

Wells, who left the game more than two hours before it ended, watched some of the game in the training room and the rest in the clubhouse.

“We were able to celebrate it all together,” Wells said.

Notes: Travis Lakins, who was optioned to Triple-A Norfolk on May 11th, had his option reversed and is on the 10-day injured list because of right elbow inflammation retroactive to May 12th. … Mancini extended his on-base streak to 14 straight games. … Kyle Bradish (1-2, 5.08) will face Jeffrey Springs (1-1, 1.66) on Saturday night. … Vespi was the fourth Oriole to make his major league debut in the 12th inning or later. The last was Alberto Castillo on April 28th, 2008.

High-A Aberdeen was held to three hits as the IronBirds lost to Rome, 6-0.