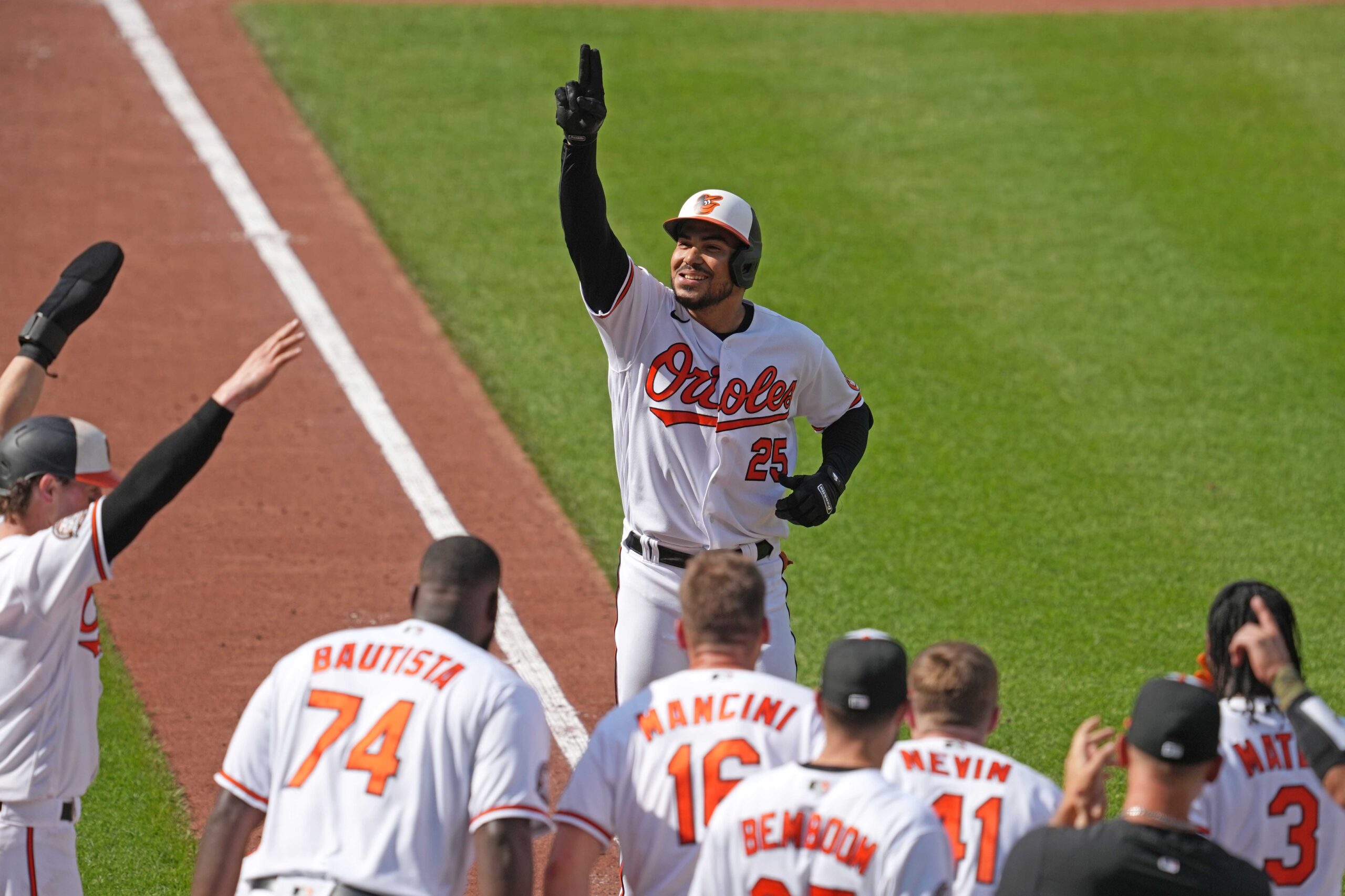 BALTIMORE—Oriole outfielder Anthony Santander is fluent in English but conducts his interviews through translator Brandon Quinones. He listens to the questions, then responds in Spanish.

After he hit a three-run, walk-off home run to give the Orioles a 9-6 win over New York Yankees before an announced crowd of 23,819 at Camden Yards on Thursday, Santander was asked what the feeling was like as he rounded the bases and saw his teammates waiting to great him with a Gatorade shower.

“Amazing!” he responded in English with a big smile. The word fit the victory for the Orioles, who twice overcame two-run deficits and then gave away a 6-5 lead in the ninth when closer Jorge López struggled. The frustration gave way to jubilation when Santander crushed the first pitch he saw from Yankee reliever Lucas Luetge over the left-field fence for his game-winning home run, his seventh of the season. It ended a six-game losing streak for the Orioles.

“It feels incredible to finally have my first walk-off and obviously I dedicate it to my parents who have been with me, supporting me the whole way through since I was a little kid,” Santander said through his translator, Quinones.

After the Yankees tied the game in the ninth — their third out coming on a bases-loaded liner by Giancarlo Stanton to centerfielder Cedric Mullins — Austin Hays reached on a throwing error by Josh Donaldson. After Ramón Urías struck out, Trey Mancini fouled off six pitches and roped a single to center on the 10th pitch of his at-bat. It took only one pitch for Santander to hit the the third home run of the game over the left-field wall, whose new dimensions — nearly 30 feet deeper and 6 feet higher — have become a focal point for the Orioles and their opponents.

“I’m not going to talk about the wall,” manager Brandon Hyde said. “It was good to see it go over a couple of times.”

The Orioles helped themselves by turning three double plays. They lead the majors with 49. They needed every out and every contribution from their bench in a game that took four hours.

New York took a 2-0 lead in the top of the first on a single off the left-field wall by Stanton that scored Aaron Judge and Anthony Rizzo.

Chirinos hit his two-run home run, his first of the season, against Yankee starter Jordan Montgomery in the second to tie it 2-all.

Shortstop Jorge Mateo hit a single in the third to score Santander, who also had two doubles.

Stanton led off the fourth with his 11th home run, the first opponent to homer to left in 2022. It tied the score at 3.

Zimmermann allowed a season-high five runs on seven hits in five-plus innings. Asked after the game what he took away from his performance, he smiled and said, “a win.”

Montgomery, who allowed three runs on seven hits in five innings, was relieved by former Oriole Miguel Castro to begin the sixth. Santander walked, and Mateo was awarded first base on catcher’s interference after a challenge by Hyde. Tyler Nevin’s single scored Santander, and Chad Green relieved Castro.

Chirinos struck out, and pinch-hitter Cedric Mullins flied to deep center to drive home Mateo for a 5-5 tie. Rougned Odor, who was pinch-hitting for Chris Owings, singled to right to score Nevin and put the Orioles ahead, 6-5.

In the top of the ninth, the Yankees tied it against López, who struck out Aaron Hicks to end the eighth. López got into immediate trouble by walking Kiner-Falefa, who stole second. With two outs, DJ LeMahieu blooped a single to right to score Kiner-Falefa with the tying run. The Yankees loaded the bases before Stanton lined out against Félix Bautista to set up Santander’s heroics.

“I put myself in the pitcher’s shoes in that situation,” he said. “Knowing that he wanted to come in, trying to jam me, trying to make me hit a soft grounder to force a double play. I was really able to get my hands in and focus on that. I hit the ball really well.”

Notes: Hyde thinks that first baseman Ryan Mountcastle, who’s on the 10-day injured list because of a left wrist injury, will be ready to play when he’s eligible on Saturday. “He’ll take some BP on the field tomorrow and if everything goes well, he’s in there for Saturday.” … Hyde said that he’s hoping Paul Fry, whom the Orioles traded to Arizona for 19-year-old right-hander Luis Osorio, will benefit from the move. The Diamondbacks optioned Fry to Triple-A Reno. “I hope he fits right in and pitches well … I just think it was 100 percent confidence with Paul in that if things were going well, you could see it in the first batter he was facing most nights if this was going to go really well or ‘I might need to get somebody up.’” … Santander’s walk-off home run was first by an Oriole since since Rio Ruiz did it on August 11, 2019 against the Astros … .Mateo stole his 11th base in 12 attempts. … The Orioles open a three-game series against Tampa Bay on Friday night. Tyler Wells (1-3, 4.18) will face Jalen Beeks (1-0, 1.72). … Rizzo was ejected in the eighth inning for arguing balls and strikes.