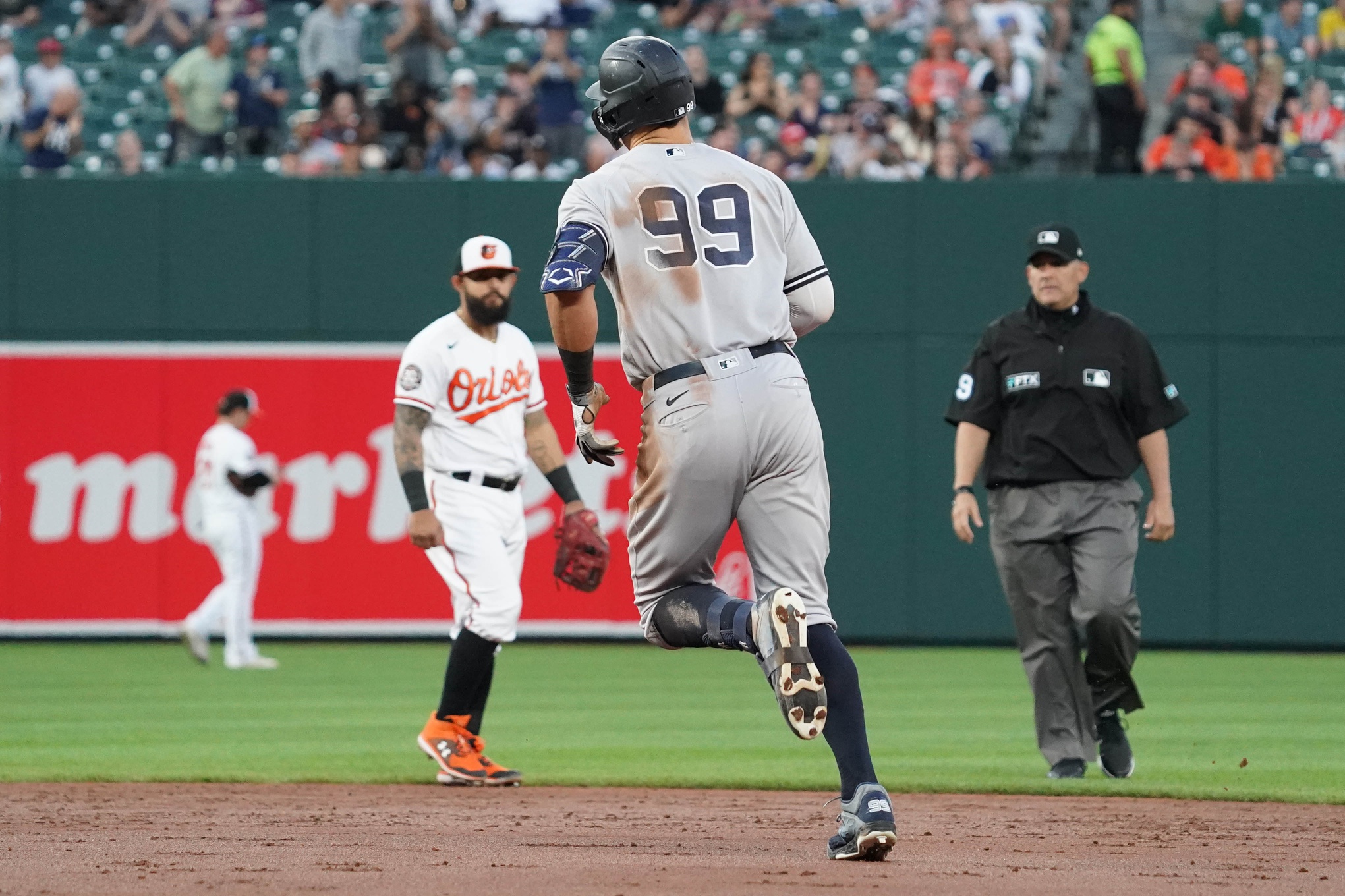 BALTIMORE—The announced crowd of 12,635 at Oriole Park was as usual when the New York Yankees come to Baltimore much louder. When the Yankees took the field for the bottom of the first, the fans in the right- and center-field bleachers chanted each of the defensive players’ names, as they do in the Roll Call at Yankee Stadium.

The Yankee players acknowledged the chants and went out and beat the Orioles, 5-4, on Tuesday night.

Aaron Judge homered twice, and just missed a third with a double. He had four hits.

“He hurts us. He’s done that in the past, too,” manager Brandon Hyde said. “You make pitches in the middle to him, and he’s got a chance to go deep every time. He’s a really good player, superstar-type player and we’ve got to pitch to him a little better.”

Oriole starter Spenser Watkins hit DJ LeMahieu with a pitch to begin the game. Judge hit a ball high off the left-field wall. LeMahieu scored, and Judge was thrown out after oversliding third base.

Oriole shortstop Ramón Urías homered in the second against Jameson Taillon (4-1) to tie it at 1.

Judge homered to right with one out in the third.

“If you try to get too fine with guys like that, you usually tend to make a mistake,” Watkins said. “If you try to be fine around [some] guys you tend to get hurt, so it’s just a matter of staying on the attack.”

Watkins was relieved that Judge didn’t homer in the first. Before the park’s dimensions in left field were changed — with the fence being moved back nearly 30 feet and made 6 feet higher — Judge’s double would have been a homer.

“Having that wall extended helps for sure,” Watkins said.

Oriole first baseman Trey Mancini led off the fourth with a single and advanced to third on a double by second baseman Rougned Odor. Mancini scored when a grounder by Urías to second was booted by Gleyber Torres. Odor scored on a sacrifice fly by Tyler Nevin to give the Orioles a 3-2 lead.

Judge’s second home run of the game, his 14th of the season, off Joey Krehbiel in the fifth tied it at 3.

Oriole reliever Dillon Tate (0-2) struggled in the sixth. Torres singled, Isiah Kiner-Falefa was hit with a pitch and Kyle Higashioka walked to load the bases with one out. Torres scored on a grounder to short by LeMahieu, and New York (27-9) led, 4-3.

With two outs in the seventh, Josh Donaldson doubled, and Torres hit a hard shot to short that went through Urías’ legs for an error, and the Orioles trailed, 5-3.

As he entered the game, Gillaspie said he began tearing up when he heard public address announcer Adrienne Roberson tell the fans that it was his debut.

“I hope I can throw strikes with all of this energy coming out of me,” Gilliaspie said. “I’m really comfortable pitching out of the stretch for some reason. It really wasn’t that hard.”

The Orioles staged a rally in the ninth. Nevin singled with two outs against Yankee closer Aroldis Chapman. Pinch-hitter Robinson Chirinos singled off Chapman’s glove, and Ryan McKenna doubled to left to score Nevin. But Cedric Mullins popped out, and Chapman escaped with his ninth save.

“It was great to see the fight in our guys,” Hyde said. “Scoring off Chapman is no easy task. We haven’t done a whole lot of that over the years since I’ve been here. To watch us get a two-out rally there, bring the winning run to second base, I thought the guys took good at-bats.”

In his first game since suffering a cut on his left hand, Austin Hays was hitless in four at-bats. He’s in an 0-for-18 slump.

Catcher Adley Rutschman hit his second home run and centerfielder Kyle Stowers hit his fifth. Both were two-run home runs. Marcos Diplán struck out the side in the ninth for his second save.

Jacob Teter had a two-run home run as High-A Aberdeen beat Rome, 4-2. It was Teter’s third home run. Houston Roth (3-0) allowed two runs on three hits in 5 1/3 innings, striking out six and walking one. The IronBirds (25-7) have the best record in minor league baseball.