Orioles shut out by Tigers despite another quality start by Zimmermann; Fry designated for assignment - BaltimoreBaseball.com 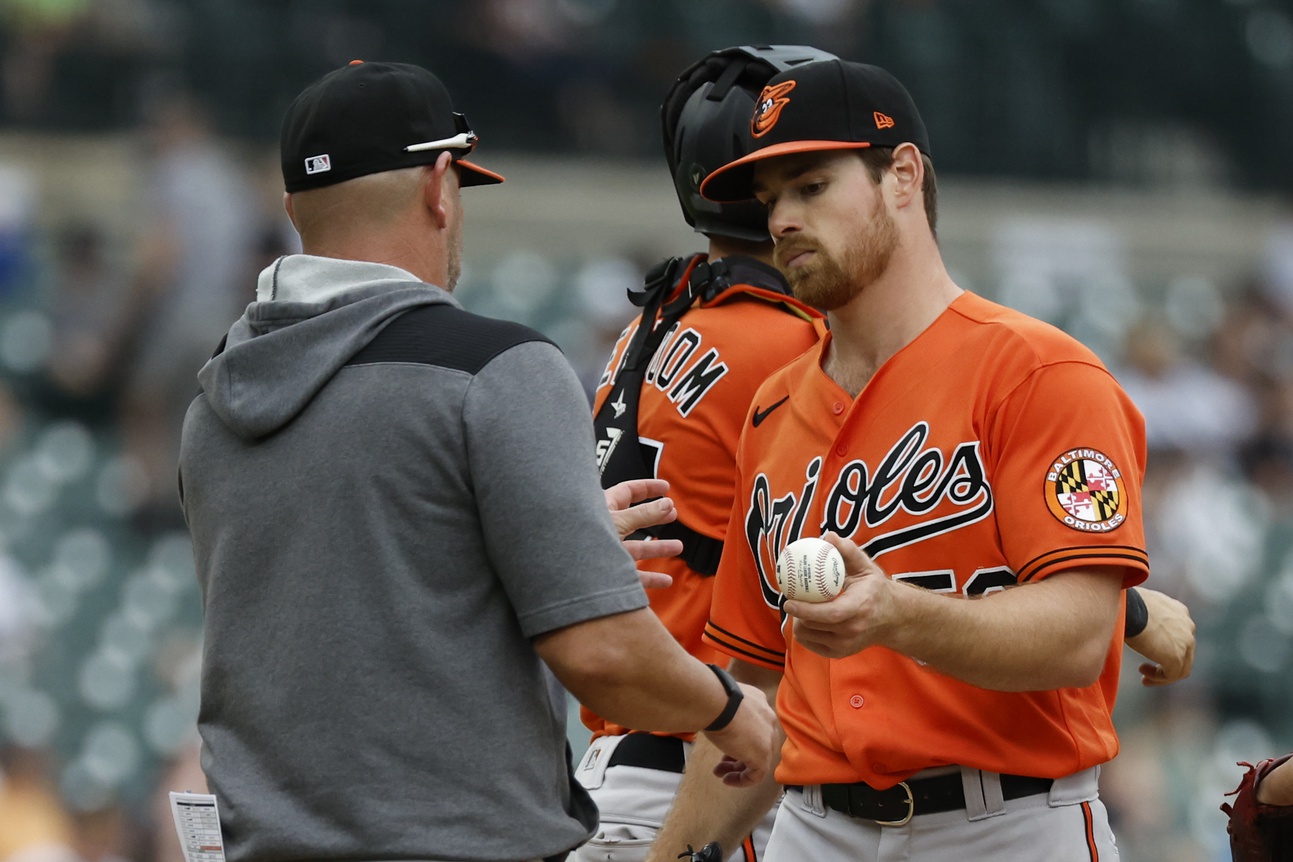 On Friday night, the Orioles left 14 runners on base and went 1-for-12 with runners in scoring position in a 4-2 loss to the Detroit Tigers. A day later, the Orioles had fewer scoring chances, and didn’t capitalize on any.

Equaling their season low with just four hits, the Orioles lost, 3-0, to the Tigers at Comerica Park on Saturday.

It’s evident that the loss of first baseman Ryan Mountcastle, who was placed on the injured list on Friday because of a left wrist forearm strain, and outfielder Austin Hays, who was spiked while sliding headfirst into first on Thursday, has affected the Orioles’ offense. Ramón Urías was the cleanup hitter on Saturday.

After beating one of the better teams in baseball, the St. Louis Cardinals in two of three games, the Orioles have dropped their first series since they were swept by the New York Yankees in three straight games on April 26th-28th.

The Orioles (14-20) must win on Sunday to ensure a .500 road trip before a seven-game homestand against the New York Yankees and Tampa Bay Rays begins on Monday.

The Orioles, who lead the American League in double plays turned, grounded into four. Entering the game, they had grounded in two in only one game. They lacked patience at the plate and struggled against the Tigers’ bullpen.

Detroit (11-23) had entered the series with just nine wins, fewest in the American League.

Tigers starter Michael Piñeda left the game after Urías, who was batting cleanup for the first time in his career, lined a ball back sharply to Piñeda to begin the second. He left the game because of a fractured right middle finger.

Five Tiger relievers combined to throw 7 2/3 scoreless innings. The Orioles’ first hit didn’t come until Tyler Nevin singled against Jason Foley with one out in the fifth.

Ryan McKenna, who was called up from Norfolk before the game because of the injury to Hays, played left and made an error in the second inning that led to a sacrifice fly by Willi Castro.

Besides the unearned run in the second, Zimmermann allowed homers to Eric Haase in the fifth, and Castro in the seventh.

The Orioles left four runners on base and were 0-for-2 with runners in scoring position. They were shut out for the second time, the first since they lost 8-0 to Tampa Bay on April 10th, the third game of the season.

Notes: Triple-A Norfolk outfielder Yusniel Diaz suffered a strained right hamstring. It’s the same injury he had last month. … High-A Aberdeen second baseman Connor Norby, who was out because of swelling around his eyes after being hit by a pitch, is on the injured list. … Denyi Reyes, who was optioned to Norfolk after Friday night’s game, became the fourth pitcher in Orioles history to throw two or more perfect innings in their debut. Reyes retired all six batters he faced. Chad Paronto (April 18th, 2001) was the last. … Tyler Wells (1-2, 3.75) will face Tarik Skubal (2-2. 3.94) on Sunday. … The game was played in two hours, 29 minutes, fastest of the season.

Sulser in, Fry out: The Orioles claimed right-handed pitcher Beau Sulser off waivers from Pittsburgh. Sulser, the brother of former Oriole reliever Cole Sulser, who was traded to Miami on April 3rd, was optioned to Norfolk.

Like his brother, Beau Sulser attended Dartmouth. The 28-year-old had a 3.72 ERA in four games for the Pirates. He struck out 10 and walked six in 9 2/3 innings.

To make room for Sulser on the 40-man roster, Paul Fry was designated for assignment. Fry was optioned to Norfolk before Thursday’s game.

The Orioles will attempt to trade Fry before exposing him to waivers. Fry was 7-16 with a 4.80 ERA and seven saves in five seasons with the Orioles.

In nine games against Tampa Bay last season, Fry was 0-3 with a 34.71 ERA. After a poor performance against the Rays, the Orioles sent him to Norfolk in late August, and he never returned.