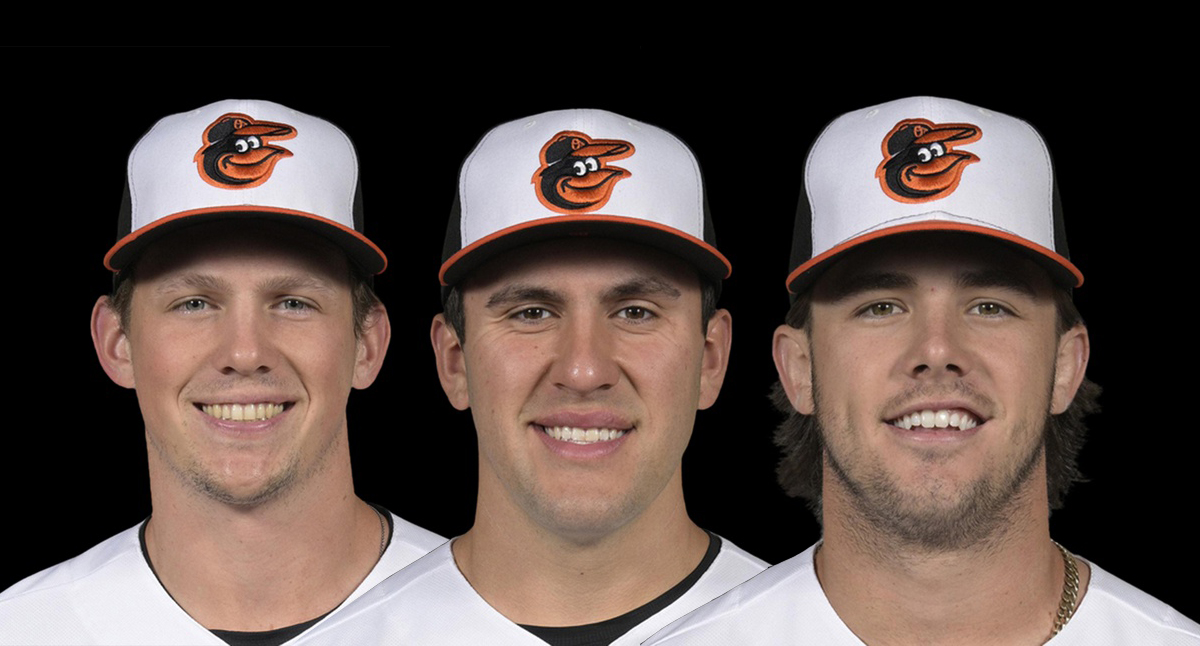 ST. LOUIS—Grayson Rodriguez continued his string of strong starts for Triple-A Norfolk against Memphis on Thursday, allowing a run on three hits in five innings, striking out eight and walking two. Rodriguez’s catcher was Adley Rutschman, who homered while continuing to rehab the sore right triceps muscle that kept him out of major league spring training and away from the Orioles to begin the season.

Oriole fans are eager to know when they will see them at Camden Yards.

Fans have waited patiently and, more recently, not-so-patiently for the 24-year-old Rutschman, who was the first overall pick in the draft in June 2019. Were it not for the lost 2020 minor league season because of the pandemic, Rutschman and Rodriguez, and perhaps Hall already would have been with the Orioles.

The conventional wisdom has been that the Orioles will call up Rutschman next week when the team returns home to play the Yankees. He played four games at High-A Aberdeen, three more at Double-A Bowie before the Orioles — eager to make sure Rutschman wouldn’t miss at-bats because of the heavy rain forecast last weekend — sent him to Norfolk a few days ahead of schedule.

Thursday was Rutschman’s sixth game for the Tides, and maybe he’ll meet the Orioles when they return Monday from Detroit to begin a seven-game homestand that starts with the Yankees, followed by the Tampa Bay Rays.

Interestingly, the Orioles announced on Wednesday that throwback pricing, which seems to have helped attendance for some early season games, will continue for the homestand.

With inexpensive tickets in limited numbers, two attractive opponents and the possibility that Rutschman will be there, the homestand should draw well. Next Saturday will be the busiest sports day in Baltimore of the year when the Orioles play the Rays at about the same time the Preakness will be run.

Having Rutschman on hand will make the Orioles a huge local story now that Kentucky Derby winner Rich Strike won’t be running at Pimlico. It would be even more fun to have the 22-year-old Rodriguez join Rutschman, but that’s probably not going to happen that quickly.

The moves of Orioles executive vice president/general manager Mike Elias are hard to predict, but he’s eager to both promote and protect his top prospects. Rodriguez’s debut probably will come a short time after Rutschman’s, most likely at home. It’s smart business to allow your top prospects to begin in front of the home fans.

Even though the Orioles drew only 15,685 fans for Kyle Bradish’s first start against Boston on April 29th, those who attended were enthusiastic and engaged.

Bradish’s 11-strikeout without a walk start on Tuesday night against the Cardinals was another promising sign that the Orioles are moving in the right direction.

They have closely monitored Rodriguez’s innings in the minors, and Elias wants to make sure that Rodriguez, the team’s No. 1 draft pick in 2018 and the top pitching prospect in the minors, will be able to pitch until the season ends on October 5th.

Elias has said he wants his top prospects to stay in the majors once they’re promoted. He treats Bradish, Hall, Rodriguez and Rutschman differently than outfielder Ryan McKenna, who was optioned to Norfolk seven times last season.

McKenna is a valuable extra outfielder, but the Orioles need to maintain roster flexibility. The same might apply to intriguing prospects Rylan Bannon, whose debut Thursday included a hit in his first at-bat and a diving stop on his first play, and infielder/outfielder Tyler Nevin.

Hall’s case is different than Rodriguez’s. A year ago, Hall, the team’s top pick in 2017, was ahead of Rodriguez. The 23-year-old began the year at Bowie; Rodriguez at Aberdeen. But after Hall injured his left elbow and couldn’t pitch after June, Rodriguez moved past him on the promotion chain.

Hall threw only 31 2/3 innings last season and has so far thrown a combined 10 2/3 innings at Aberdeen, Bowie and Norfolk. His innings’ count will be lower than Rodriguez’s this season, and if his innings are going to be limited, it makes sense to have him throw as many as possible with the Orioles.

A month from now, Rutschman, Rodriguez and perhaps Hall could all be with the Orioles, and the club, which has improved, could be even better.

Another candidate for promotion might be outfielder Yusniel Diaz, who is the only one of the five players the Orioles obtained in the trade for Manny Machado in 2018 not to appear in the major leagues. Diaz impressed in spring training, but he needs to stay healthy and continue to produce.

Even though Gunnar Henderson, selected after Rutschman in the 2019 draft, is having a great start for Bowie, the 20-year-old infielder is expected to have to wait until 2023 to get a shot with the Orioles.

The newest Orioles should make for a lot of fun, and perhaps a better record.