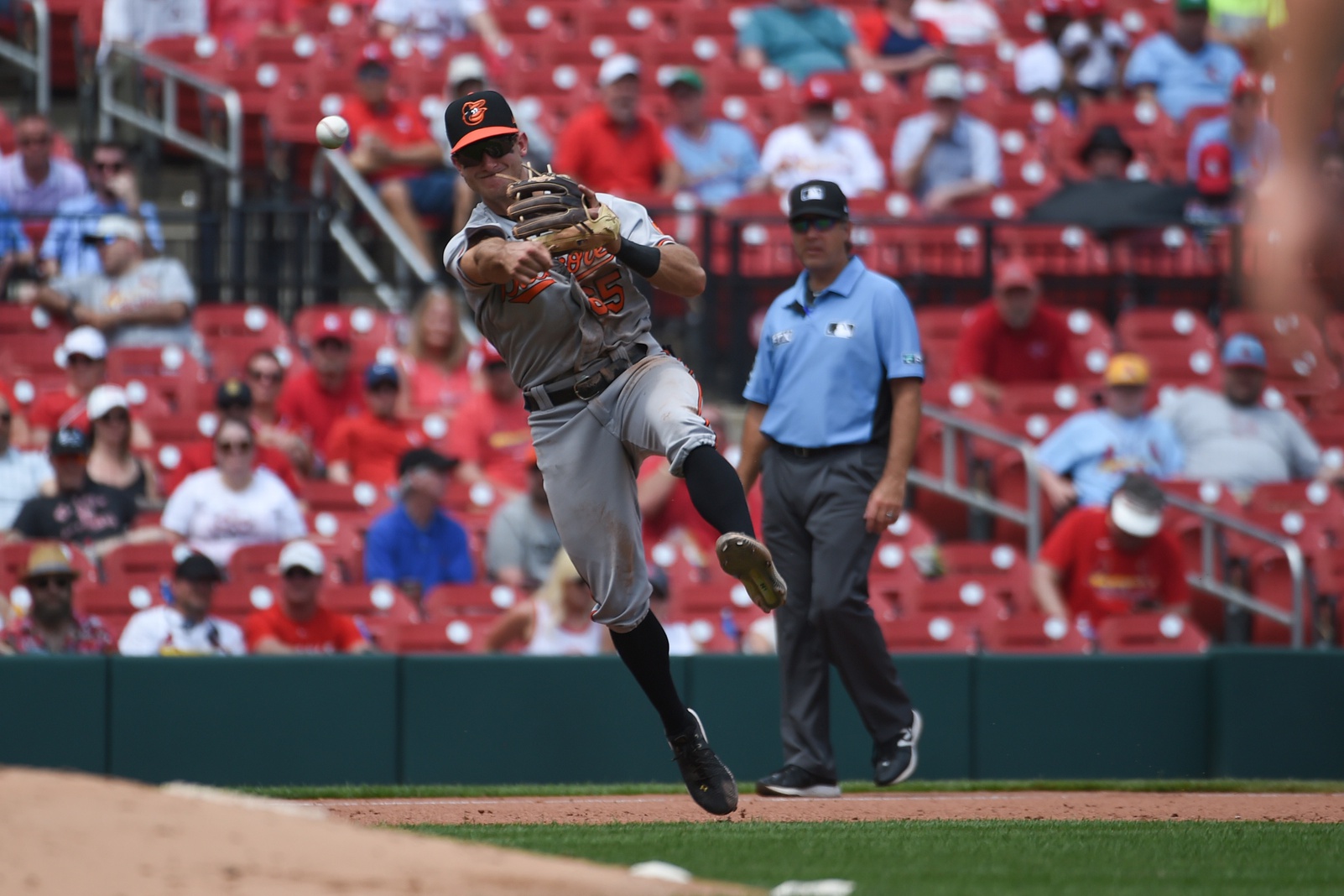 ST. LOUIS—With three position players unavailable and manager Brandon Hyde forced to rely on his bullpen, the Orioles showed their grit in a 3-2 win over the St. Louis Cardinals before an announced crowd 35,198 at Busch Stadium on Thursday.

Hyde didn’t have infielder Ramón Urias because of an abdominal injury and first baseman Ryan Mountcastle because of a sore wrist. They also didn’t play second baseman Rougned Odor because of sinus issues.

Barely an hour before Thursday afternoon’s game, the Orioles recalled Rylan Bannon and started him at third base. The patchwork Orioles (14-18) won their second straight series. Of their last five series, the Orioles have won four and split the fifth. Overall, they’ve won eight of 11.

“It means a ton,” Hyde said of the win. “We pieced it together there … We give up two runs to these guys on a bullpen day. That’s pretty good.”

The Orioles didn’t announce that reliever Bryan Baker was starting until about 2 ½ hours before game time Baker retired the first seven Cardinals (17-14) to face him.

Bannon’s first major league chance at third came quickly. He made a diving stop of a shot by Nolan Arenado with two outs in the first and threw to first, a play similar to those Manny Machado often made.

“The play right there in the first inning definitely made things a little easier,” Bannon said. “My feet didn’t really get under me until the fifth or so inning and after a couple of at-bats, that’s when it really sunk in where I was. Just a weird feeling being out there early in the game. A ton of emotions.”

Bannon was one of the five players the Orioles received from the Los Angeles Dodgers for Machado in July 2018.

“I let him know he’s in the big leagues an hour before the game,” Hyde said. “He’ll never forget that, and he’s hitting seventh, and it’s in Busch Stadium.”

Andrew Knizner singled with one out in the third, and Keegan Akin replaced Baker. His first batter, Brendan Donovan, hit into a double play to end the third.

Akin (1-0) preserved the 1-0 lead. Jorge Mateo hit his second home run of the year against Steven Matz (3-3) in the second. Bannon singled on the first pitch, but Anthony Bemboom struck out to end the second.

Bannon’s family, which lives in suburban Chicago, didn’t come to the game because he didn’t know he was playing until close to game time. They’ll be at Comerica Park this weekend when the Orioles play Detroit.

Akin pitched 2 2/3 innings, allowing a hit, walking two and striking out four. In the fourth, he allowed a leadoff single to Tommy Edman, and two-out walks to Juan Yepez and Albert Pujols before striking out Tyler O’Neill.

Bemboom hit his first home run with two outs in the seventh. It was also his first RBI this season. Chris Owings singled, stole second and scored on Cedric Mullins’ single against Génesis Cabrera, and the Orioles led, 3-0.

Dillon Tate allowed a double to Arenado in a scoreless sixth. When Corey Dickerson was announced as the pinch-hitter for Pujols to begin the seventh, Hyde summoned Cionel Pérez.

Pérez hit Dickerson on the right elbow and, after a lengthy delay, he remained in the game.  O’Neill hit into a double play, and Dylan Carlson hit his second home run to cut the Orioles’ lead to 3-1. Knizner struck out to end the seventh.

Goldschmidt stole second with Félix Bautista pitching. Bemboom’s throw was wild, and Goldschmidt advanced to third but stayed there when Yepez flied to right to end the inning.

O’Neill singled with one out, and Carlson popped to short center. Mateo made an excellent running catch and O’Neill, who was already at second, was easily doubled up to end the game. Bautista recorded his second save.

“It was incredible to see how he was able to execute that play and turn that double play to win us that game,” Bautista said through a translator. “Every time I get the ball right now, it feels like my confidence keeps going up, and I’m really thankful they believe in me and they trust in me. Every time I go out there and I pitch well and I do a good job, my confidence only grows more every day.”

Bautista was the sixth pitcher used, and he threw 24 pitches. Had the game continued, the only reliever left in Hyde’s bullpen was Denyi Reyes, whose contract was purchased from Norfolk earlier on Thursday.

“Happy with how our guys dealt with a ton of adversity this series,” Hyde said. “You win a series on the road in St. Louis. That’s not an easy thing to do. Where we are organizationally, everybody’s proud of how we’re playing. We’re going to keep playing hard.”

Notes: Hyde hopes that relief pitcher Jorge López, who is on the bereavement list after the death of his grandfather, will return to the team in Detroit. … According to the Elias Sports Bureau, Bannon was the third Oriole since 2000 to get a hit on his first major league pitch. Rhyne Hughes (April 24th, 2010) and Willie Morales (April 9th, 2000) were the others. … The Orioles open a three-game series in Detroit on Friday. Jordan Lyles (2-2, 4.05) will face Eduardo Rodriguez (0-2, 4.50). On Saturday at 4:10 p.m., Bruce Zimmermann (2-1, 2.67) will face Michael Pineda (1-3, 3.43). On Sunday, Tyler Wells (1-2, 3.75) will face Tarik Skubal (2-2, 2.94). … Before the game, the Cardinals honored the St. Louis Browns, who moved to Baltimore and became the Orioles in 1954. Members of the Browns Historical Society and Fan Club were present. … Austin Hays was spiked when Cabrera tagged him out on a grounder to end the Orioles’ seventh. “He got stepped on,” Hyde said. “It’s three spots, pretty bad laceration. We’ll see how it goes with him.” … The Orioles turned three double plays, the 10th time his season they’ve had multiple double plays. They lead the American League with 40 double plays.