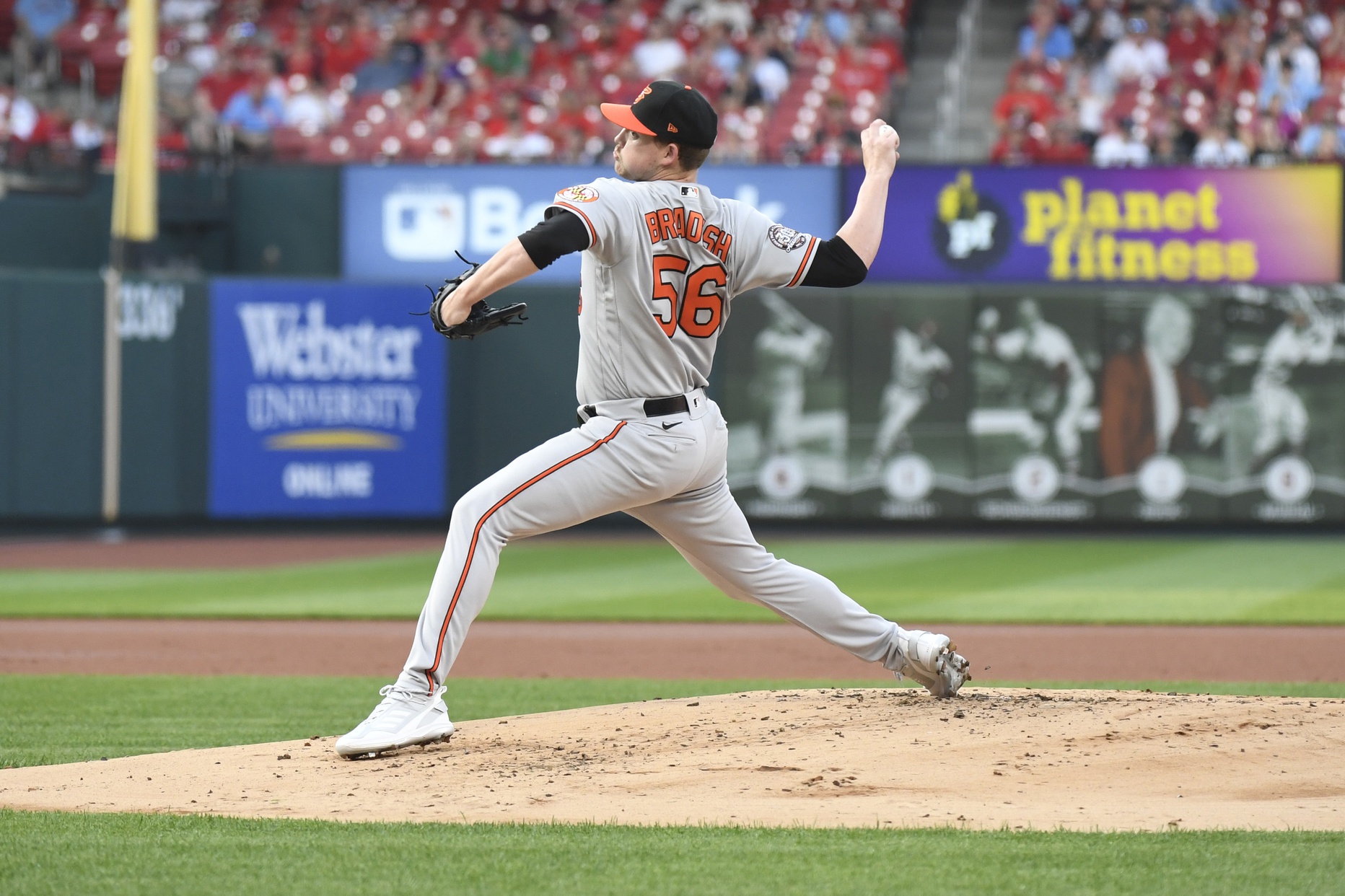 ST. LOUIS—Oriole rookie Kyle Bradish is showing impressive polish and talent. The 25-year-old right-hander was dominant in his third major league start, striking out 11 and allowing just two runs on four hits in seven innings as the Orioles won a season-high third straight game, 5-3, over the St. Louis Cardinals before an announced crowd of 33,649 at Busch Stadium on Tuesday night.

The Orioles (13-17) had never played in the newest incarnation of Busch Stadium. Their only trip to St. Louis came in June 2003.

Bradish (1-1) recorded his first win, throwing 90 pitches and not allowing a walk. It was the Orioles’ fourth straight quality start. Jordan Lyles and Bruce Zimmermann pitched 7 1/3 and six innings in Sunday’s doubleheader, and Tyler Wells threw a career-high six on Monday.

“This is definitely the top, doing it on the big stage,” Bradish said. “They are a really good team, a lot of veterans that have been a staple in this league for a while, but I would say it was cool. This stadium is awesome, the backdrop.”

“He’s got major league starter stuff,” manager Brandon Hyde said. “It’s really good. I was a little bit nervous early. I felt there was a lot of deep counts, a lot of waste pitches, a lot of balls out of hand early. After the second or third, not too many bad misses. The slider was plus, plus, tonight.

“Tough place to pitch. Tough environment, and he answered the bell.”

Cedric Mullins had a four-hit game. He hit a two-run home run in the third against Packy Naughton (0-1) to give the Orioles a 2-0 lead. In the Orioles’ first 29 games, Mullins had seven two-hit games and not a three-hit one. He also stole a base.

Tyler Nevin hit his first home run in the fourth. In the fifth, Anthony Santander, who had three hits, drove in Mullins with an RBI double against Kodi Whitley.

“This atmosphere, playing against a good team like that, those wins are very fun,” Nevin said. “Playing well right now. The bats are starting to click along with the pitching that’s been there all year. Since I’ve been here, everybody’s been on fire. We’re feeding off each other, for sure.”

Nevin and Bradish played together last year and briefly this year at Triple-A Norfolk.

“Avoiding the big inning,” Nevin said. “He was dominant every start for flashes. Getting more consistent is what got him here and what’s going to keep him here for the long haul.”

In the sixth, the Orioles extended their lead to 5-0 on an RBI single by Trey Mancini against Nick Wittgren.

“This last week, our guys settled in a little bit,” Hyde said. “They were antsy early. I thought they were trying to do too much. Even today, it would have been nice to cash in some of those runs while you have the lead to make it a little bit easier on ourselves. We don’t, but Mancini picked us up with the big two-out single.”

Bradish faced the minimum 15 batters in five innings with the help of double plays in the first and second innings.

Yadier Molina led off the sixth with a double to right-center. Harrison Bader followed with a drive to deep left-center that Mullins couldn’t run down. The ball hit the wall, caromed off Mullins’ leg and away from Santander, who was playing left. Bader had the first inside-the-park home run by a Cardinal at home since Vince Coleman’s on May 21st, 1985. That was hit in Busch Stadium II.

“A lot of fans after that inside-the-parker kind of erupted,” Bradish said. “I was, ‘Wow, this is really loud.’”

In Bradish’s second start, against the Twins, he pitched three scoreless innings before Minnesota roughed him up with four in the fourth to end his night. This time, Bradish didn’t flinch. Instead, he struck out Brendan Donovan, Tommy Edman and Paul Goldschmidt.

“I was just so impressed after the inside-the-park homer,” Hyde said. “We had the lead. Things could have unraveled there. The crowd’s into it, and he goes out and punches out three. Then he goes out and has a great seventh inning as well.

“Definitely shows some toughness, punching out Goldschmidt … To show the composure he did and come back and punch out the next three—that’s a big league effort.”

In the seventh, Bradish struck out Nolan Arenado, retired Juan Yepez on a fly to Mullins and ended his night with a strikeout of Tyler O’Neill.

“It was definitely a big moment. It kind showed that Hyde trusted me to get back out there for the seventh after the rough start to the sixth,” Bradish said.

After Joey Krehbiel pitched a scoreless eighth, Dillon Tate struggled in the closer role (Jorge López is on the bereavement list because of the death of his grandfather). Donovan hit his first major league home run against Tate to lead off the ninth. Edman singled and, after Goldschmidt flied deep to left and Arenado lined to right, Tate threw a wild pitch and hit Yepez with a pitch.

Hyde summoned Félix Bautista to try to get the final out. He struck out O’Neill on a breaking ball after registering 102-mph with a fastball for his first major league save.

Notes: Bradish was the seventh pitcher in franchise history to throw seven or more innings with 11 or more strikeouts and no walks. John Means was the last to do it in his no-hitter on May 5th, 2021. … Ramón Urías was a late scratch because of abdominal discomfort. … The Orioles turned three double plays. They have 37, which leads the American League. … Spenser Watkins (0-0, 3.22) will face Miles Mikolas (2-1, 1.53) on Wednesday night at 7:45.