Orioles give away Game 1 to Royals, 6-4; Lyles pitches into 8th but team unravels with 3 errors; No-hitter for Bowie - BaltimoreBaseball.com 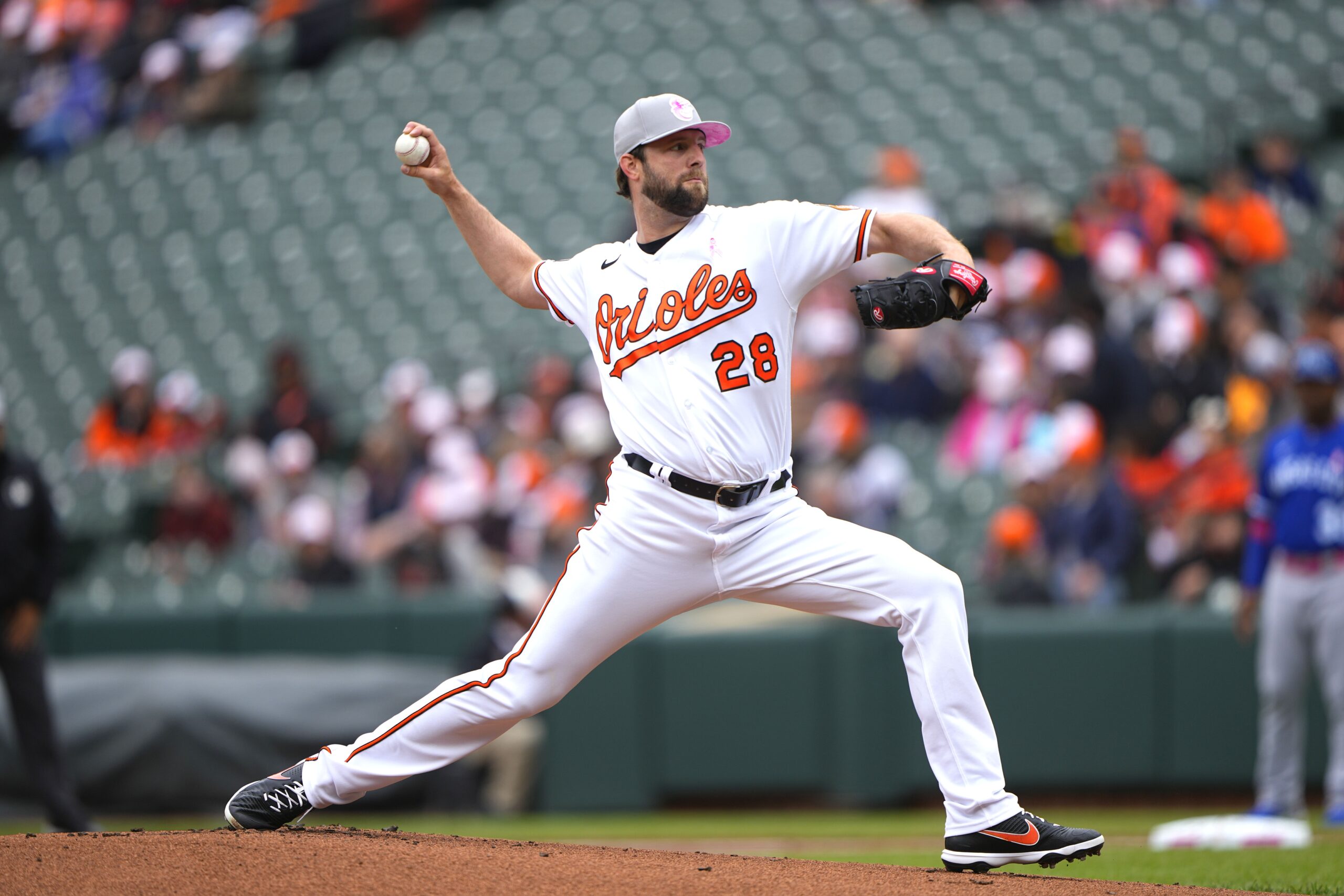 BALTIMORE—Ineffective relief pitching and sloppy fielding cost the Orioles their first three-game winning streak of the season on Sunday in the first game of a Mother’s Day doubleheader at Camden Yards.

In a 4-4 game in the ninth, after relief pitcher Jorge López allowed the tying run to score in the eighth, second baseman Rougned Odor bobbled Nicky Lopez’s two-out grounder for an error. López threw a pickoff throw into right field, gave up a single to Michael A. Taylor, and the Orioles lost to the Kansas City Royals, 6-4, in a game they led by a run going into the eighth.

Only three of the Royals’ six runs were earned because of the Orioles’ defense.

“We didn’t play our best defensive game,” manager Brandon Hyde said. “We made a couple of errors that cost us there late in the game. It is a part of it. We did have opportunities to score early, too, that would help us out, but we left a lot of runners on base in the first half of the game. If we drive a couple of those guys in, make it a little bit easier on ourselves. We’re playing a lot of tight games. We’ve just got to play good defensively to win tight games.”

With three games spaced so close together, Hyde was hoping to get a deep start from Jordan Lyles. He got that start. Lyles, who allowed an unearned run on an error by first baseman Ryan Mountcastle, had a 4-3 lead when he left the game with one out in the eighth.

López (3-2) allowed the tying run and two in the ninth. Salvador Perez added an RBI single.

The Orioles took a 1-0 lead in the second against Royals starter Zack Greinke when Jorge Mateo singled with two outs, and Cedric Mullins drove him in with a ground-rule double.

Kyle Isbel doubled with one out in the third. Lopez walked, and Isbel scored on a single by Edward Olivares.

Kansas City (9-15) scored twice in the fifth. Bobby Witt Jr. and Isbel singled. Lopez bounced to Mountcastle, whose throw to second was wild, allowing Witt to score and Isbel to take third. Isbel scored on a sacrifice fly by Andrew Benintendi, and the Royals led, 3-1.

Austin Hays singled in the fifth with two outs. He had four hits and has six straight hits in his last two games. Mountcastle, who also had four hits, hit a ball off the top of the left-field wall to score Hays. After a crew chief review, the call wasn’t overturned, and Mountcastle remained at second with a double.

Mullins, Trey Mancini and Hays each singled in the first, but with the bases loaded and one out, Mountcastle popped to second and Odor grounded to short.

The Orioles took a 4-3 lead in the bottom of the seventh when Hays walked with two outs against Collin Snider, Mountcastle singled, and Odor blooped a double inside the left-field line to score Hays and Mountcastle.

Lyles became the first Oriole to complete seven innings this season and got an out in the eighth. After Benintendi singled, López replaced Lyles and allowed a single to Perez on an 0-2 pitch. Benintendi took third and scored on Ryan O’Hearn’s sacrifice fly to left to tie the score, 4-4.

“Seven innings is kind of the goal,” Lyles said. “Overall pleased with the outing.”

“We really haven’t had that, a guy that is able to take the ball, and is irritated when he comes out in the eighth inning, which I’m happy about,” Hyde said. “Doubleheader days, this long stretch, we’re going to rely on starters, and the guy goes into the eighth inning for us.”

The Orioles had another chance in the ninth against Ben Barlow. Hays and Mountcastle singled with two outs, but Odor flied to left to end the game.

Notes: Travis Lakins, who was optioned to Triple-A Norfolk after Thursday’s game, was the 27th man for the doubleheader. Lakins never left for Norfolk because the Orioles knew a rainout and doubleheader was a possibility. … The Orioles have won two straight three times this season.

Bowie no-hitter: Garrett Stallings and Morgan McSweeney combined on a no-hitter as Double-A Bowie beat Harrisburg, 4-0, in the first game of a doubleheader. Stallings (2-2) pitched six innings, walking two and striking out five, and McSweeney pitched a perfect seventh. It’s the first no-hitter for Bowie since Mike Baumann pitched one in July 2019.

Second baseman Joey Ortiz drove in two runs and third baseman Gunnar Henderson had two hits. Ortiz homered and doubled in the Baysox’s 2-1 win in the second game of the doubleheader. It was Ortiz’s first home run.

Allen joins Orioles: Left-hander Logan Allen, who was claimed off waivers from Cleveland, is close with Oriole assistant pitching coach Darren Holmes, who he has known since he was a child in Asheville, North Carolina.

“He was my first coach—ever,” Allen said. “He taught me how to pitch … We lived three minutes from each other. I went to school with his son. We were best friends growing up.

“He was the first person who taught me how to pitch, my travel ball coach, probably the guy I went to for everything. He’s family to me. He was one of my first phone calls as soon as I got the news … He taught me how to throw a curveball. I’ve thrown the same one ever since.”

Allen has experience starting and relieving.

“Right now, he’s going to come out of the bullpen,” Hyde said. “We’re always open for options, but he’ll start out in the bullpen. We’ll try to get him a lower-leverage situation early because he hasn’t pitched in a while. Looking forward to seeing what he can. Really like his arm.”