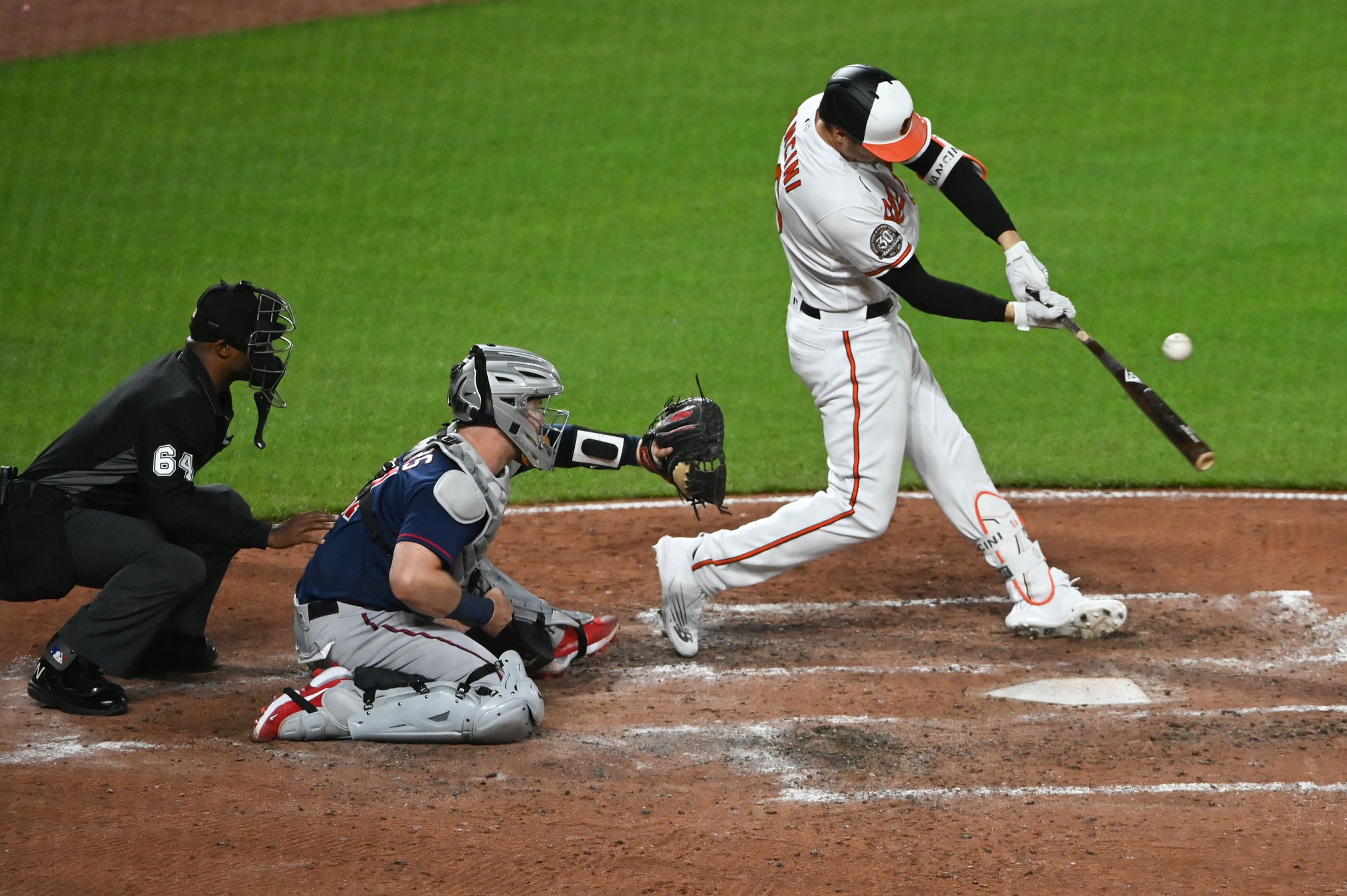 BALTIMORE—While the Orioles allowed seven runs in a loss to the Minnesota Twins on Tuesday night, it was their offense that manager Brandon Hyde singled out for criticism.

The Orioles had just seven hits, five of them singles, in their 7-2 loss to the rampaging Twins, who have won 11 of 12 before an announced crowd of 6,678 at Camden Yards.

In the early weeks of the season, the club’s offense has been lagging, near the bottom in the major leagues in most categories. Against Minnesota (15-9), they were just 1-for-7 with runners in scoring position and left seven runners on in the first five innings.

“We’ve got to make a little more contact as a club,” Hyde said. “We’ve been hitting the ball fairly well at times, not having the best of luck … We’re just not taking enough good at-bats to win games against good clubs and good pitching staffs.”

The Orioles (8-16) might have suffered another loss when third baseman Tyler Nevin left the game after injuring his right groin when he slid into second trying to advance on a fly ball to center in the fourth inning. He was called out and left the game after the fifth.

Nevin will be reevaluated on Wednesday, but with just a three-man bench, the Orioles can’t afford to play a man short for long.

“We’ll see how I feel [Wednesday],” Nevin said. “Felt like I was getting pretty tight in the groin area when I went back on defense after tagging up.

“Nothing happened where I knew something was wrong, like immediately, so that’s a good sign. When I was out there, it was grabbing on me, and it was getting a little sore. The last thing I want to do is pull myself from the game, especially a close one at the time. I want those moments. We’ll see how I feel tomorrow, but I’m optimistic.”

“I definitely didn’t have the command that I’ve had so far this year throughout the start,” Zimmermann said. “I thought I was pretty crisp through the first three, and then it kind of got away from me a little bit in the fourth and the fifth.

“I’ve just got to be a little bit more fine in those innings. I’ve got to know the situations and bear down and make those pitches. Those middle innings of the game are the ones that get you to the sixth and seventh inning, which is what my goal is every time I toe the rubber.”

In the fourth, Zimmermann walked Gio Urshela with two outs, who scored on a double by Jose Miranda.

Minnesota starter Joe Ryan allowed his first run after 20 scoreless innings in the bottom of the fourth. Austin Hays singled, and Rougned Odor slapped a double to left. Nevin grounded to shortstop Carlos Correa, who booted the ball, allowing Hays to score.

Minnesota took a 2-1 lead in the fifth when Ryan Jeffers led off with a walk. Zimmermann hit Gilberto Celestino with a pitch. Jeffers scored on an RBI single by Jorge Polanco.

The Orioles tied it in the bottom of the fifth on a double by Cedric Mullins and a single by Trey Mancini, who was 2-for-4 after missing three games because of bruised ribs.

Zimmermann said that with a struggling offense, there’s no extra pressure put on Oriole pitchers.

Gary Sanchez doubled with one out in the sixth against Joey Krehbiel (1-3). Travis Larnach walked, and Jeffers hit a 424-foot blast to left-center, putting Minnesota ahead, 5-2.

Three straight doubles against Keegan Akin by Gilberto Celestino, Byron Buxton and Carlos Correa — on which Mullins nearly made a sensational catch at the wall — and a sacrifice fly by Polanco drove in the Twins’ final two runs.

While Mancini and Hays each had two hits, Mullins, who became the first Oriole to hit 30 home runs and steal 30 bases in a season in 2021, was 1-for-5, and is hitting just .221 with two homers and three steals. First baseman Ryan Mountcastle, whose average is .227, was 0-for-4 and saw just four pitches in his first three-at bats.

“I think we have guys that are just swinging a lot of times,” Hyde said. “They’re seeing their numbers on the scoreboard and they’re unhappy, so they’re trying to get them up in one at-bat. You’ve got to have a pitch-by-pitch approach and win every pitch. A lot of guys are just chasing numbers right now.”

“We’re trying to be aggressive,” Mullins said. “At the same time, it’s a matter of trying to get the right pitch to hit, especially with guys in scoring position. We’re continuing to have talks as a team about how we can continue to get better with that, including myself. It’s a matter of just being a little smarter at the plate, and good things will happen from there.”

Minor league update: In his first game for Double-A Bowie, catcher Adley Rutschman went 1-for-4, and third baseman Gunnar Henderson hit a three-run home run, his fourth, as the Baysox lost to Harrisburg. 6-5.

Right-hander Logan Gillaspie was promoted from Bowie to Norfolk.