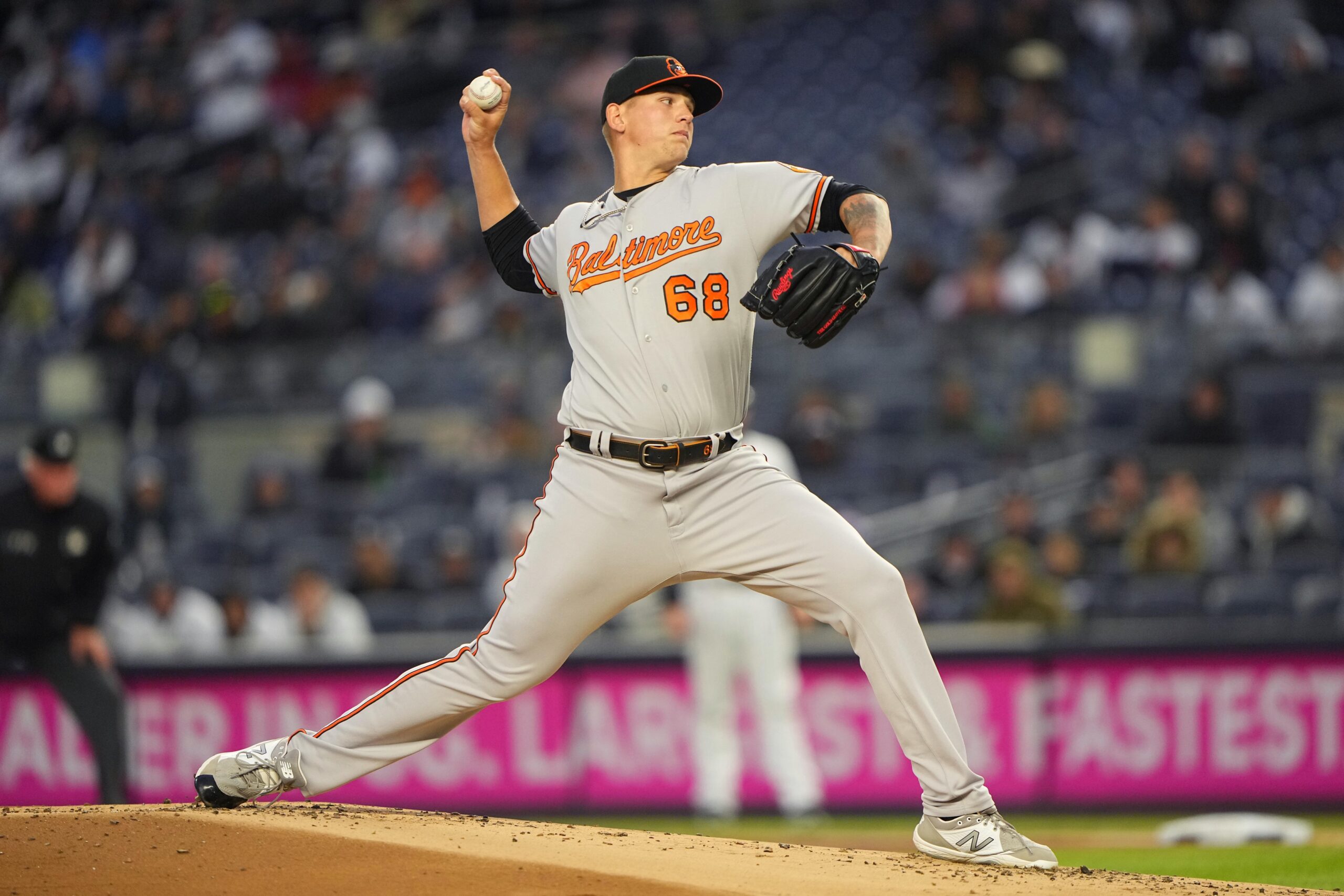 NEW YORK—The Orioles are convinced that Tyler Wells will be an excellent major league starter. But, for now, they need to limit his innings so that he can pitch an entire season.

Wells pitched five innings, his longest yet, and left after giving up two runs on just three hits, one a first-inning, two-run homer to Giancarlo Stanton. The Orioles’ bullpen couldn’t keep the game close, and they lost their third straight game, 5-2, to the New York Yankees before an announced crowd of 31,122 at Yankee Stadium on Wednesday night.

“We were going to extend him a little bit today if things were going well, and they were,” manager Brandon Hyde said. “I thought he got better as the game went on.” The 27-year-old right-hander was dominant at times, showing poise and command.

Even so, Hyde wasn’t tempted to extend Wells further.

“That’s the most he’s thrown, by far,” Hyde said. “Him going five innings, around [72] pitches. That was definitely the max, and happy that he got that.”

Earlier in the day, Hyde texted Wells, telling him he was prepared to let him pitch longer.

Wells said the game was particularly important for him.

“Today marks a milestone for me,” Wells said. “This is the most I’ve thrown in a game since I had Tommy John surgery in 2019, and I guess this would be the longest since 2018, so it feels really good. I was glad to keep the pitch count low. I was able to go out there for the fifth inning. That was my ultimate goal tonight, and I accomplished that, so I’m happy about that.”

Joey Krehbiel (1-2) relieved Wells to start the sixth after Anthony Santander tied the score, 2-2, in the top of the sixth with his third home run of the season, and his second of the series. Santander has reached base in each of the Orioles’ 18 games.

The Orioles (6-12) have homered in just seven games, and they’ve lost each of them.

DJ LeMahieu walked against Krehbiel, who struck out Aaron Judge. Anthony Rizzo, who hit three home runs to right on Tuesday night, singled to left-center with LeMahieu running on the pitch, taking third.

After Félix Bautista replaced Krehbiel, Stanton hammer a 114-mile-per-hour sacrifice fly to center to score LeMahieu and give New York (12-6) a 3-2 lead.

Joey Gallo, who hit his first home run of the season on Tuesday, hit his second to lead off the seventh. It was the first home run Bautista has allowed.

Isiah Kiner-Falefa singled, and Dillon Tate replaced Bautista. After two groundouts moved Kiner-Falefa to third, he scored on a wild pitch by Tate, to expand New York’s lead to 5-2.

The Orioles had an early scoring chance against Yankees starter Jordan Montgomery.

In the third, Jorge Mateo led off with a double and Ryan McKenna was hit by a pitch. However, Montgomery caught Mateo off second, and he was tagged out in a rundown. He had been successful in his first seven steal attempts.

Stanton’s home run in the first, his third of the season, was the the 350th of his career.

“That is a really, really good lineup, and you can’t afford bad pitches,” Wells said. “I’m really hard on myself, so I would consider it a bad pitch, knowing that his bat path is really long.”

After Stanton’s home run, Wells retired 13 of his final 14 batters. He worked a career-high five innings, allowing the two runs on three hits, striking out four without walking a batter.

“He pitched really well today. He gave us a chance to do some damage later on,” centerfielder Cedric Mullins aid.

Michael King (2-0) worked 2 1/3 scoreless innings in relief of Montgomery, and Clay Holmes registered his second save.

“I feel like as a team we’ve made a lot of adjustments,” Mullins said. “Regardless of the score, I feel like we always have a chance to make a comeback or continue to do damage and put pressure on other teams. We’ll continue to work on that, continue to do so and put some wins on the board.”

Notes: The Orioles conclude their 10-game road trip on Thursday afternoon. Bruce Zimmermann (1-0, 1.20) will pitch against Jameson Taillon (1-1, 3.07). Game time is 1:05 p.m. … Game-time temperature Wednesday was 49 degrees, the coolest this season. In the late innings, Hyde exchanged his cap for a wool hat, and many of his players wore masks. … Hyde said first baseman Ryan Mountcastle, who was scratched because of a stiff neck, would play on Thursday if he felt better. … The Orioles are 4-17 against the Yankees since May 15, 2019.

Low-A Delmarva allowed 10 runs in the sixth inning in a 14-2 loss to Augusta.