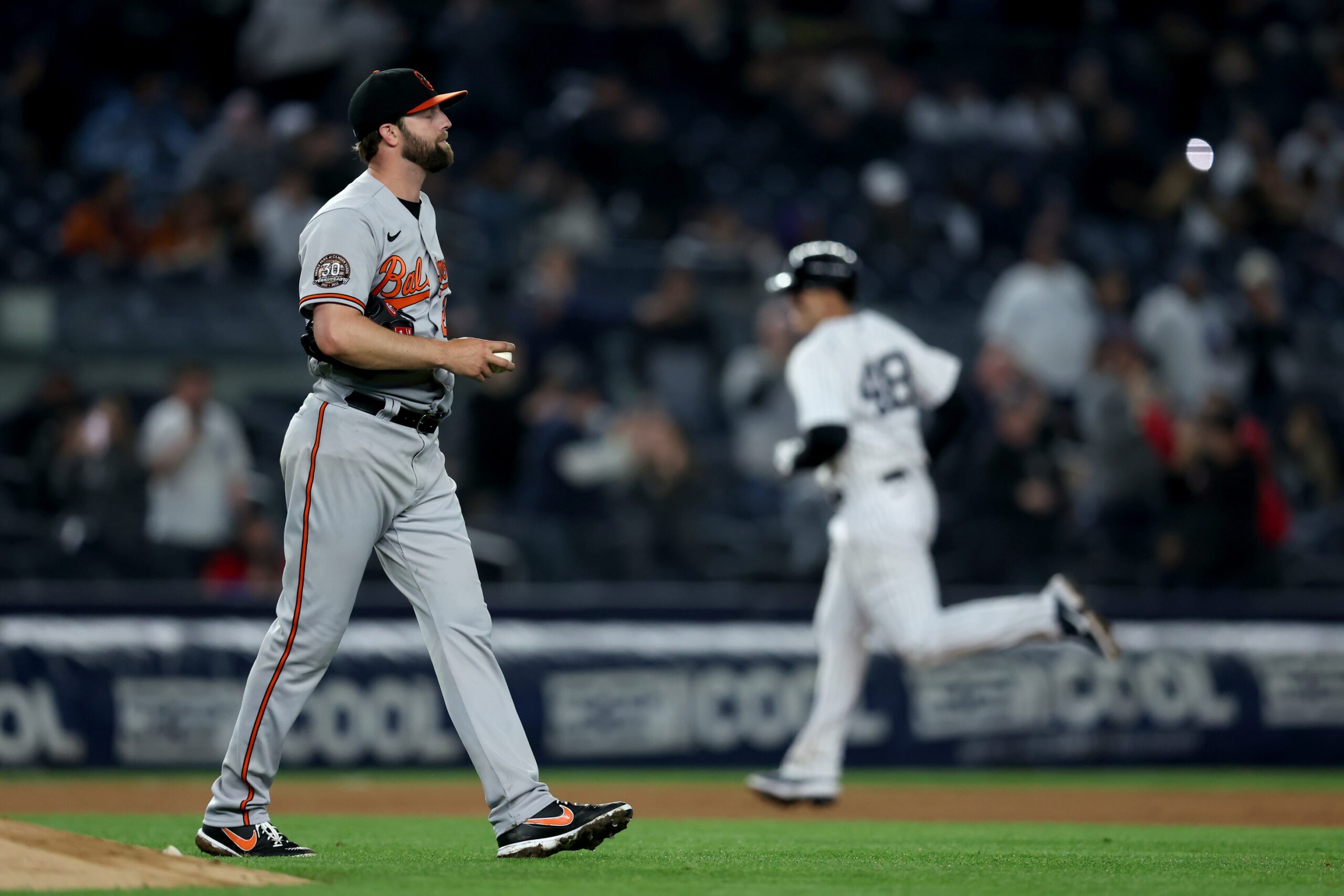 NEW YORK—The Orioles came into Yankee Stadium after a seven-game swing in Oakland and Los Angeles, hoping that their early season success against the Yankees would continue.

After a day off, the Orioles both scored and allowed season highs in runs in a 12-8 loss to the Yankees before an announced crowd of 28,596 on Tuesday night.

Luis Severino was dominant early, and though the Orioles (6-11) rallied in the seventh and again in the eighth, the Yankees (11-6) not only held on, they added on.

“He’s a difficult out every night,” Orioles manager Brandon Hyde said. “Rizz is tough because he’s right on top of the plate. He’s got huge power. He can pull to all fields. He’s smart. He took advantage of [the ballpark], all three pull-side homers here.”

Severino (2-0) retired the first 14 Orioles until Austin Hays walked on a 3-2 pitch. Ramón Urías lined to second baseman DJ LeMahieu, who made a leaping catch, ending the fifth.

It was Severino’s first start against the Orioles since August 26th, 2018.

“He’s got really good stuff,” Hyde said. “That’s a mid-to-upper-90s fastball. He’s got a good slider, cutter to go with it, changeup to left-handers. I thought his pitch mix was really good. We haven’t seen him in a while. He’s got great stuff, and he was on tonight. Fortunately, after that fifth inning, we started taking some really good at-bats.”

With one out in the sixth, Jorge Mateo singled to left, the Orioles’ first hit. Cedric Mullins walked, and Anthony Santander homered to left, his second home run of the season, and New York’s lead was cut to 6-3. Santander has reached base in each of the Orioles’ 17 games this season.

In his first two at-bats against Severino, Santander was called out on strikes and bounced back to the pitcher.

“He had great command of his pitches tonight, attacking the outside part of the zone, especially against lefties like myself,” Santander said through an interpreter. “He was doing a really good job with that. Luckily in the … sixth inning we started to get hits off him and, obviously, things started to change and we got more comfortable facing him.”

In the seventh, Rougned Odor doubled, and Clay Holmes replaced Severino. After Hays struck out, Urías singled, scoring Odor, and it was 6-4.

Rizzo homered twice against Orioles starter Jordan Lyles (1-2), a three-run homer in the third and a two-run shot in the fifth. Joey Gallo hit his first in the fourth.

“This is the same for every pitcher that steps on that mound,” Lyles said. “Rizzo, he’s a tough at-bat. The first one, I threw a good pitch on the black. I threw two of them. He put it in the seats. The second one, he put a good swing on a changeup that I wish I could have back. Smart hitter, sitting on pitches, good hitter. That was the name of the game today. Rizzo did his job.”

“A couple of long at-bats, a lot of their guys were fouling stuff off,” Lyles said. “After the first two innings, they made me battle, a lot.”

In the seventh, Bryan Baker, who relieved Lyles and retired the first four batters he faced, allowed singles to DJ LeMahieu and Aaron Judge to begin the seventh. Paul Fry walked Rizzo to load the bases, and Giancarlo Stanton singled to score LeMahieu.

After Josh Donaldson struck out, Gleyber Torres tripled, and the Orioles trailed, 10-4.

Trey Mancini’s RBI single in the eighth scored Mullins. After Lucas Luetge hit Odor with a pitch, Jonathan Loáisiga gave up a three-run home run to Hays, his second of the season. He also homered in the Orioles’ loss on Sunday at Los Angeles.

Judge hit his fourth home run with two outs in the eighth against Alexander Wells, and Rizzo followed with his eighth, giving him a three-homer game.

The Orioles scored six runs in their 7-6 loss to the Angels on Sunday, and they registered eight on Tuesday.

“I just think we’re getting in a little bit better groove offensively,” Hyde said. “We got off to a bumpy start early. Guys were pressing a little bit. I think you’re starting to see guys relax now. Now the homers are coming.

“We’re starting to hit some home runs, which is nice, but the overall at-bats are better … We could have had more runs, but their defense stopped us. We didn’t pitch our best game tonight, but I’m pleased with the at-bats.”