Behind the scenes with Orioles broadcaster Kevin Brown - BaltimoreBaseball.com 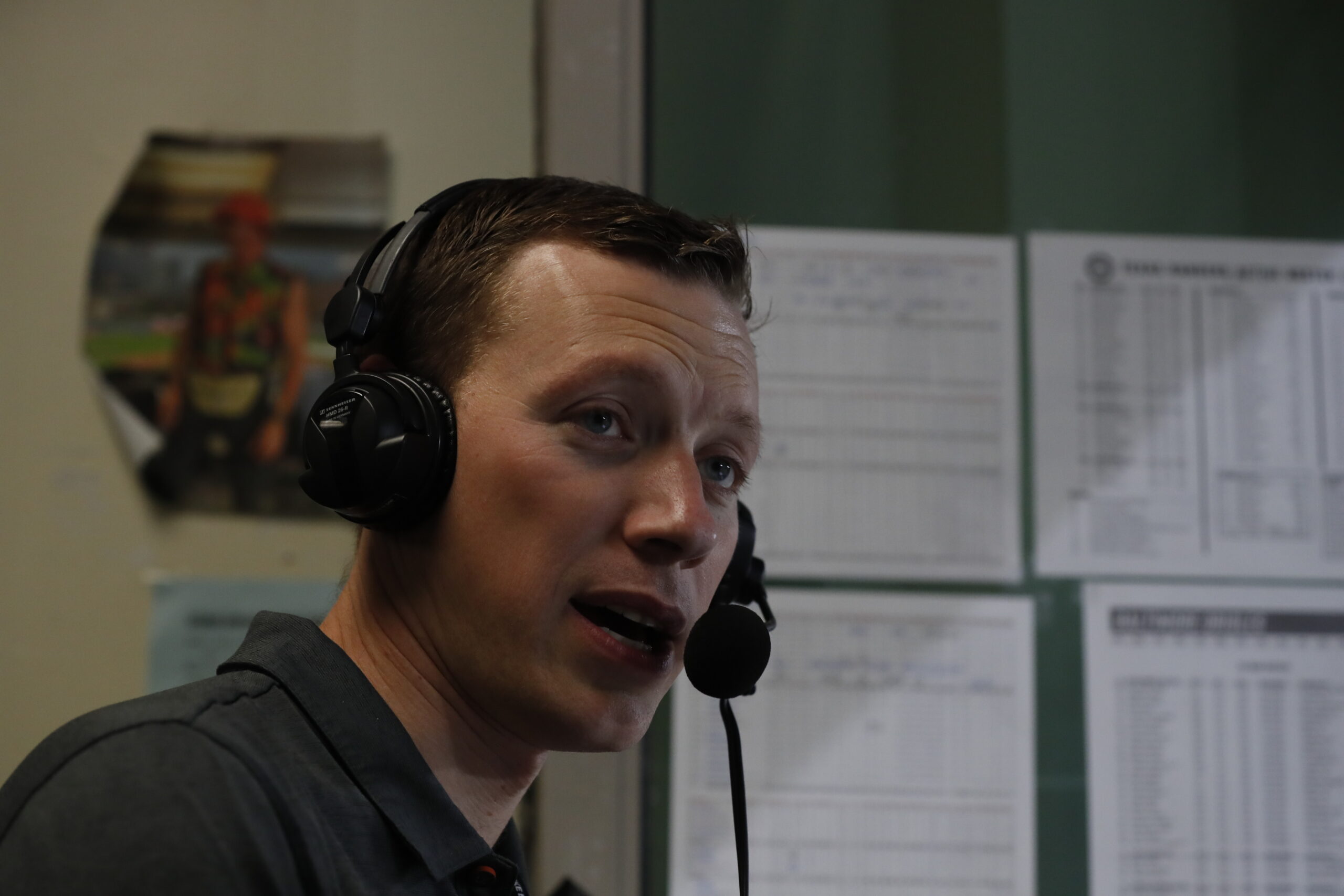 Kevin Brown began broadcasting Orioles games on radio in 2019. In his first year as their primary television voice, he’ll call about 130 games on MASN, working mostly with Jim Palmer and Ben McDonald.

Before joining the Orioles, Brown, who is 32, broadcast games at Triple-A Syracuse and also calls college football, basketball and other events for ESPN.

This interview has been edited for brevity and was conducted before the news that MASN will resume traveling with the team beginning Tuesday night in New York. Brown and Palmer will call the Yankee series. Radio broadcasts will remain remote.

Question: Have you wrapped your arms around being the Orioles’ full-time television broadcaster?

“It’s funny, I said, ‘I don’t know if I want to do 200 events a year, and then all of a sudden, I’m very lucky I have the opportunity to do 200 events a year, so I can do it. It’s a little crazy, but I’m a little crazy. Have I wrapped my head around it? I mean, yes and no. I’m aware of what it entails, but I know that a baseball season is a very long season. Ask me in September how I feel about it, I guess.”

Q: You’ve been here four years, but never as the main broadcaster. This year, you decided to move here. Was that to help you connect with the fans?

Brown: “Yes, yes. I felt like a part-timer for three years, you know what I mean? It made sense for my wife and I to do that because she worked out of an office in Times Square for 8, 10 years. Logistically, it didn’t make sense to keep an apartment in New York and to be here as much as I wanted to be here. We wanted to own a house. Also, I’m a part of this team, not just some fill-in guy anymore. There’s a responsibility that comes with that, and I want to fit in.

“I love our place. I love our location. People have been really nice. I’m meeting my neighbors, which I couldn’t do in New York. In New York, you’re lucky if you know one person in the building and today I was talking to two separate neighbors at the same time, so it’s been great so far.”

Q: “What is the hardest thing about broadcasting road games remotely?

Brown: “I think it’s just not getting to be around the people, honestly. The mechanics of calling the games remotely are not easy. I’ve been doing that for two years, not just here, but at ESPN, so we can do it. It’s not going to be as good, by nature, but it will be some percentage as good.

“Just missing the people is the most difficult part. We can do some Zoom calls and some phone calls and things, but just being in the clubhouse for 45 minutes, and in the 43rd minute of that, a question pops into my head.

“Getting to know the guys. Even the days where I learn nothing, just to say hi to somebody, and to continue that connection, and to be a face they know, that makes an impact, and the last couple of years, I’ve always felt a little bit like a poser because I was here less than half the time and then slightly more than half the time and you’re not somebody that’s around all the time. It’s strange to be gone for two weeks and then fall right back in with a certain player.

“If the team goes away for 10 days, it’s hard to establish that connection, I think. The hardest part of it is not even the mechanical part. The conversations around the batting cage, the conversations in the clubhouse, obviously the conversations on the bus or in the hotel, that kind of stuff. I think that’s what gets missed the most, the human element, and maybe that’s hard to quantify because people get upset when there’s a call missed when somebody’s watching the monitor and, hey, that happens. People don’t always notice the little nugget we slip in in the third inning that we got from talking to Bryan Baker three days ago. That’s the most challenging part of it. We’re working around it, but that’s the most challenging thing.”

Q: You were a minor league broadcaster, and most broadcasters have other jobs. What was yours at Syracuse?

Brown: “I was the PR director of the team as well, so you do public relations, media relations. You work on the game notes and the stat packs every day, any local media interviews. After the game, somebody’s got to be in the clubhouse.

“You write the program for the team, the monthly program. Are you paid extra for that? No. Are you expected to do that? Yes. You make appearances at preseason events and Hot Stove dinners and things. This is so much easier. Sometimes, players say that, that it’s easier playing in the major leagues, and you go, ‘how could that be?’ The competition is more difficult. Because the lights are nicer and the food is better and you have much more information. It’s sort of the same way with this. My job is easier. I come and call the game. I don’t have to do six other things that might pop up on a random day.”

Q: And you don’t have to take a bus ride from Syracuse to Pawtucket?

Brown: Right, no eight-hour bus rides to Norfolk. I think we bused back from Louisville once after a noon game and got in at 4 in the morning. My last-ever minor league bus ride, we bused back from Columbus to Syracuse, and an hour in, one of the buses broke down and everybody had to crowd on, and we had players doubling up, guys playing guitar. Some of that builds character, sure, but it’s also fun to not have to do that.”

Q: When you do college football or college basketball, you’re generally working with partners who are between coaching jobs or fresh from playing. You’re working with two guys who are professional broadcasters. How hard is that?

Brown: “It’s easy, honestly. Those two guys are a breeze. We had a three-man booth for the first time. They had never worked together, for the Brewers series and, honestly, it felt like we had done it for years because they play off each other so well. The great thing about Jim and Ben is they do their homework, and certain broadcast partners, you really have to hold their hands because there are times when I’ve shown up to a game or a shootaround, and said to myself: ‘Oh, no, I know more about these teams than the analysts do,’ and I should know what I’m doing. I pride myself on doing a lot of research.

“These guys probably do more work than me. Ben knows what everybody throws and how frequently they throw it, and how good those pitches are. He knows the league average spin rate for every pitch. He has done a good job of diving into some of the newer things, being up to date on what’s happening in the game these days, and Jim, I think Jim has a subscription to every newspaper on earth.

“He knows everything about every team and he can also pull out any anecdote or fact from 1971. At first, I thought, ‘Jim just must know his numbers better than anyone knows their own numbers.’ And, then I realize, he knows everyone’s numbers. He probably knows Carl Yastrzemski’s numbers better than Carl Yastrzemski knew his own numbers. I don’t ever have to push the broadcast in a certain direction because I’m worried that Jim or Ben aren’t going to have the necessary information. I know they’re going to know what they’re talking about, and that makes it really easy for me.”

Q: Do you find that you have to pull yourself back and let them talk?

Brown: “The best parts of the three-man games were when Jim and Ben started trading stories back and forth, and I just shut up for three minutes, and every now and then, I just jumped in to call a pitch or wrap up an at-bat. I love that.

“This is the perfect sport for that. No one needs to dominate the conversation. I probably still talk too much, but I love just laying back and letting them talk about how you throw a certain pitch or talk about why they threw a certain pitch in 1993 or why Ben taped an alligator’s jaws together in the clubhouse. I like that I can just lay back with them because … what I used to [do] with inexperienced analysts, I used to ask a lot of questions.

“I don’t have to do that with these guys. I’ll ask them questions sometimes if I want them to elaborate, but they know how to connect with an audience. That makes it easy for me.”