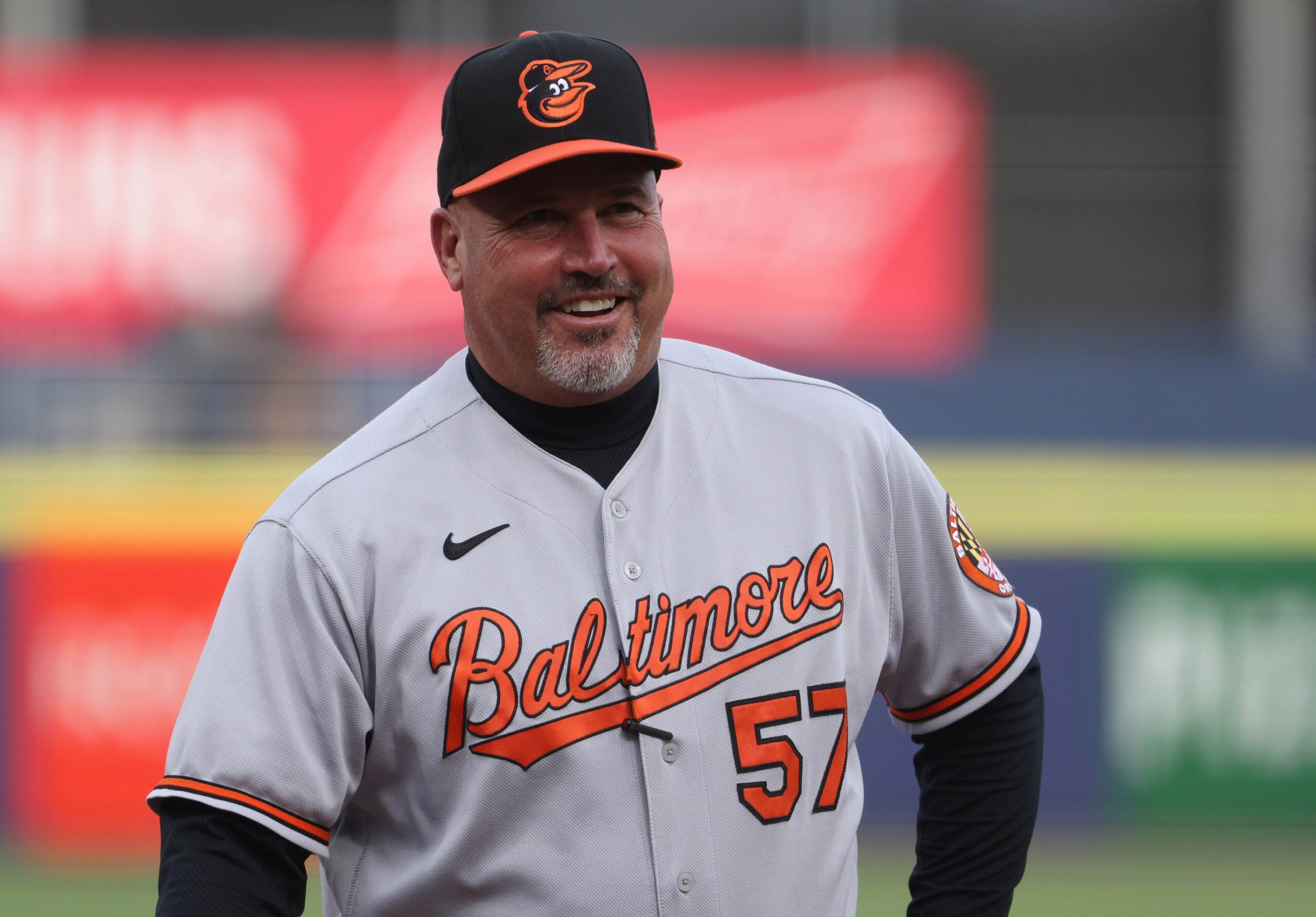 Fredi González appears to enjoy everything about baseball. He loves taking the lineup cards to home plate in his role as Oriole manager Brandon Hyde’s bench coach. He loves to instruct as the team’s unofficial fundamentals guru, and he loves to talk baseball with anyone at any time.

The 58-year-old González, who was born in Cuba, managed 10 seasons in the majors, four with Miami and six with Atlanta. His 2013 Braves won the National League East, and played in the Wild Card game in 2012. He’s in his third season as an Orioles coach after spending the previous three as a coach with the Marlins.

This interview has been edited for brevity.

Question: Is there anyone in baseball you don’t know?

Fredi González: (Laughs) “I’m sure. There’s so much turnover I’m sure a couple of people I don’t know. It’s funny, I’m starting to get guys who I coached or played for me who are now [managers]. [David] Ross is a manager. Mark Kotsay is a manager.”

Q: I don’t know anyone else who win or lose, enjoys the game more than you. Is that possible?

González:  “I enjoy the competition. I enjoy the camaraderie. I still get goosebumps during Opening Day and when that national anthem plays on Opening Day, you get tears in your eyes. This is a special thing. I hope that carries on to other people, how special it is for an Opening Day ceremony. I’ve always been a proponent of making Opening Day a national holiday. I’m still hoping, keeping my fingers crossed that it will happen one day.”

Q: Is there any time you get tired of it? It looks like you like every single thing about the game.

González: “The season is long. It beats you up. I love the game. I love learning. I think these last six years, in 2016, I got fired [after] the first couple of months in Atlanta. I’ve taken those last six years and really tried to learn this new way of thinking of what’s going on in our game and really being open and really questioned some things.

“You don’t just take things at book value. The more I’m in it, the more I get information, a lot of these [things] they’re bringing up to me in analytics are reinforcing the stuff that we learned the hard way by our mistakes or by being successful.

“It’s like, ‘OK, I understand, now they have numbers on it.’ We learned the hard way when we did something good and got burned by it. It’s not gut feeling, right. We used to call it, ‘that’s a gut feeling, I’m going to hit and run here.’ I think it was more of learning by your mistakes, and reinforcing the good with the bad, and I’m not going hit and run here with the lefty on the mound because the chances of him swinging through it and getting thrown out. Now it’s been quantified. It’s reinforced what I felt all these [years], which is a good thing.

“Getting information that I use to manage a game, that took me three or four or five hours, now it takes me 45 minutes to do it. These young kids, these young analysts could do it in 20 minutes.”

González: “It is. It’s changed a little bit, right? I see going back to where it was going back, 12 years ago. There was a movement there where you used a starter for three or four innings and then go to your bullpen. When I grew up, it was the starter went six. A quality start meant a lot to these guys, and now I’ve read articles and people have done research where you’ve got to push your starters.

“I think it’s going back a little bit. I think offensively it’s going to go back to put the ball in play instead of the three [true] outcomes, the strikeout, the base on balls, the home run. I think you’re starting to see teams valuing putting the ball in play. One of the subjects that’s really piqued my interest in the last two or three years is playing the infield in. When I first started managing, it was depending who was on the mound. You have [Max] Scherzer against you, you can’t give up a run. If you give up a run, you lose 1-0.

“That may change again when people realize that the strikeout with the bases loaded, it’s not good. You put a ball in play, you get a run and maybe people start valuing that more. It’s fun. I love being with young players. I love being around the young analytics guys, asking questions and learning. I’ve learned from them, hopefully as much as they learn from me.”

Q: How old where you when you came to the U.S?

Gonzalez: “I was almost 3. I was born in ’64 in Cuba, and we came on one of the last freedom flights of the year in December of ’66. I turned 3 January 28th. I’ve been in the States 55 years, and my parents still call us on that anniversary of the day we came to the United States, 55 years in the United States. I’m proud of that.”

Q: Have you ever been back to Cuba?

Gonzalez: “Never been back. I want to go back, but my parents, my mom and dad, lived through the bad stuff and they don’t want me to go back, and I respect that, but I would love to get an opportunity to go back to the country that you were born in, but I’m not going to do it without my parents granting me … permission.

“They still lived through people getting snatched out of houses, going to prison because you defied the government, that sort of thing. They were probably in their early teens, 20s when that takeover was happening. I’m going to respect their wishes.”

Q: Do you still ride a motorcycle to and from your home in Pennsylvania?

Answer: “I did, all the way until this last winter. My wife, who loves me dearly, sometimes I scratch my head over how much she loves me. She always kept saying: ‘I don’t want you to get hurt. Don’t ride down I-95.’ It used to take me 2 ½ hours. I used to take all the back roads I could before I got on to I-95 to get to Baltimore, but sooner or later, you’ve got to get to 95, no matter how you cut it or slice it.

Question: How did you first meet Brandon Hyde?

González: “I was managing, a rookie manager in Miami in ’07. Brandon and [current Orioles coach] Tim [Cossins] were in the minor leagues with us. They were younger coaches. Tim was a coordinator of catching and Brandon was the Double-A manager. Those guys came up and helped us in spring training.

“I thought those two guys are sharp, and they are sharp. Good baseball people, young guys. I think Cuz is maybe one of the premier catching guys in the major leagues that doesn’t self-promote, but every catcher he’s got gets better. I think Hyder is an unbelievable baseball person. This is my 23rd year in the big leagues. I signed out of high school at 18, 40 years, and he still amazes me at how well he handles situations that are thrown on him. I don’t know that I would be able to handle them as well as he does.”

Q: You’ve managed playoff teams, contending teams. How hard is it to watch all these losses?

“It’s hard to watch that. It’s a big difference from the talent this year and the talent last year. You really know your farm system, how good it is, when those kids in the seventh inning of a spring training game come up. Those guys are closer, and we’re better talent-wise in the big leagues right now, but how much that equates to wins in the American League East, I don’t know.

“You watch those guys trickle up closer and our talent here is getting better, but again, does that mean we win the division? Probably not. I don’t know how that equates to wins and losses. Hopefully, we start to see the fruits of the organization getting closer, and I hope that Brandon gets a chance to be the Brian Snitker of Atlanta where he takes the bullet and all of a sudden, one year he makes the playoffs, the next year, he loses the World Series, and bam, they win the World Series with all these young players.”

Q: Do you want to manage again?

González: “Yes, I do. The only reason for me is I didn’t like the way it ended in ’16. Here I am, playoff manager, a couple of runners-up Manager of the Year, and I’d like to get an opportunity. I think I’m better off now after spending six years learning that analytics, and what’s important and not important than it was back in ’14 or ’15.”