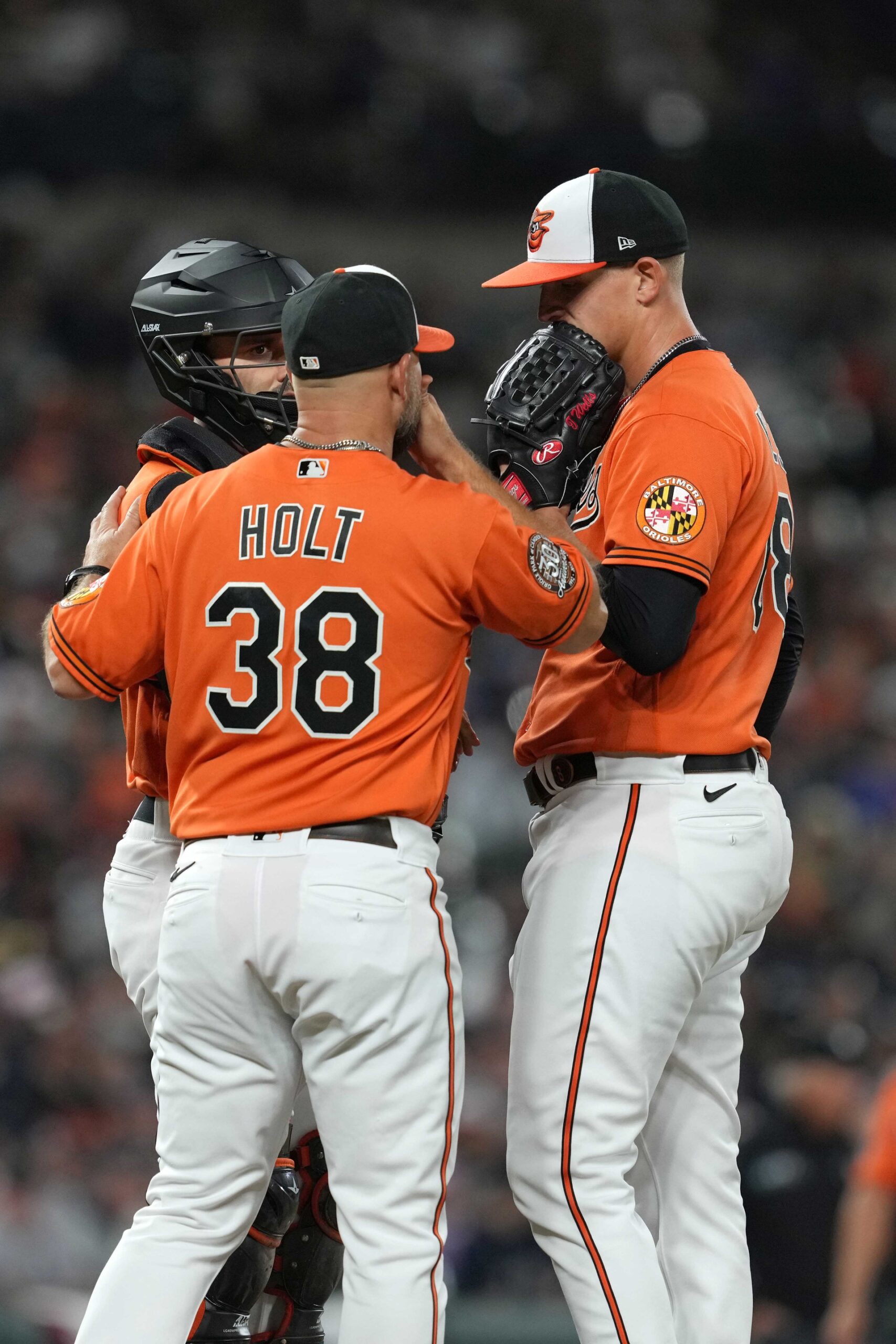 BALTIMORE—A long, cold night at Oriole Park ended with a disappointing loss. After two rain delays, the second of which began with hail, the Orioles lost to the New York Yankees, 5-2, before an announced crowd of 28,179 in a game that ended not long before midnight.

Orioles starter Tyler Wells threw four scoreless innings, though only the fourth was without a baserunner. In the first, Aaron Hicks and Aaron Judge began with singles. Wells caught Hicks attempting to steal third.

In the top of the third, Wells loaded the bases. Jose Trevino singled, Anthony Rizzo was hit by a pitch, and Giancarlo Stanton walked. Josh Donaldson bounced to third to end the inning.

Yankees starter Jameson Taillon sailed through the first two innings. Austin Hays led off the third with a single and, with two outs, Cedric Mullins hit a two-run home run on a 3-0 count, his second, and the Orioles led, 2-0.

“I felt pretty great coming out of the game and, hopefully, just continue to build on that,” Wells said. “Hopefully, I can continue to build up and get progressively deeper in games. The competitor side in me always wants to go as long as I possibly can.”

Mike Baumann replaced Wells for the fifth. After he made a strong defensive play on a dribbler by Trevino, Hicks walked, and the hail and rain came as Aaron Judge stood in the batter’s box. Play was stopped play for 49 minutes after the start of the game had been delayed by 26 minutes. The second delay forced manager Brandon Hyde to go back to his bullpen instead of allowing Baumann to continue to pitch.

“That was unfortunate,” Hyde said. “We’re going to protect Mike and be careful with him and we made the decision when the delay got to a certain point to take him out.”

When play resumed, Travis Lakins walked Judge. Rizzo followed with a single to score Hicks, and Stanton lined a double to left-center that scored Judge. Shortstop Jorge Mateo’s relay throw to catcher Anthony Benboom caught a sliding Rizzo at the plate, with the help of a replay challenge.

However, Josh Donaldson hit his first home run with the Yankees, the first allowed by the Orioles in five games at Camden Yards this season, and New York led, 4-2.

Trevino doubled with one out in the sixth and scored on a wild pitch by Paul Fry, who replaced Lakins, and New York (5-4) led, 5-2. Lakins (0-1) was charged with four runs in one inning.

In the bottom of the sixth, the Orioles loaded the bases against J.P. Sears (1-0) and Michael King. Mateo struck out against King to end the inning.

Ryan Mountcastle and Trey Mancini singled with one out in the eighth. King struck out Rougned Odor and Clay Holmes relieved King and retired Hays on a grounder to third. Holmes recorded the final four outs for the save.

“They have great arms,” Hyde said. “Clay Holmes throwing 97-mph sinkers. They have a bullpen full of guys that have really good stuff. We had some runners on. We had some chances. We just didn’t get the big hit.”

“It’s just something we’re struggling with right now,” Hyde said. “The big hits will come. We’ve got to be patient. We’re playing close games. We’re in  every single night. Games can be changed with a hit here, a hit there, but happy with how competitive we are. We’re not getting the big hit to make it easy on ourselves.”

Wells on Means: Before the game, Hyde said that starting pitcher John Means won’t pitch anytime soon and wouldn’t speculate on whether Means might be out for the season because of an injury to his left elbow.

“It sucks. It sucks a lot, but at the same time, too, he’s always there. He’s always a phone call away. He may be around, too. We don’t know the situation. We don’t know what’s going on with it yet. He is a huge part of this entire team, not just the starting staff. Hopefully, we can continue to have him around and pick his brain.”

Minor league update: Leftfielder Dontá Williams had three hits and drove in two runs, and shortstop Collin Burns had two hits and drove in a run as High-A Aberdeen beat Wilmington, 5-4. The IronBirds scored four runs in the seventh.

Triple-A Norfolk’s game at Scranton/Wilkes-Barre, and Double-A Bowie’s game at Binghamton were postponed.