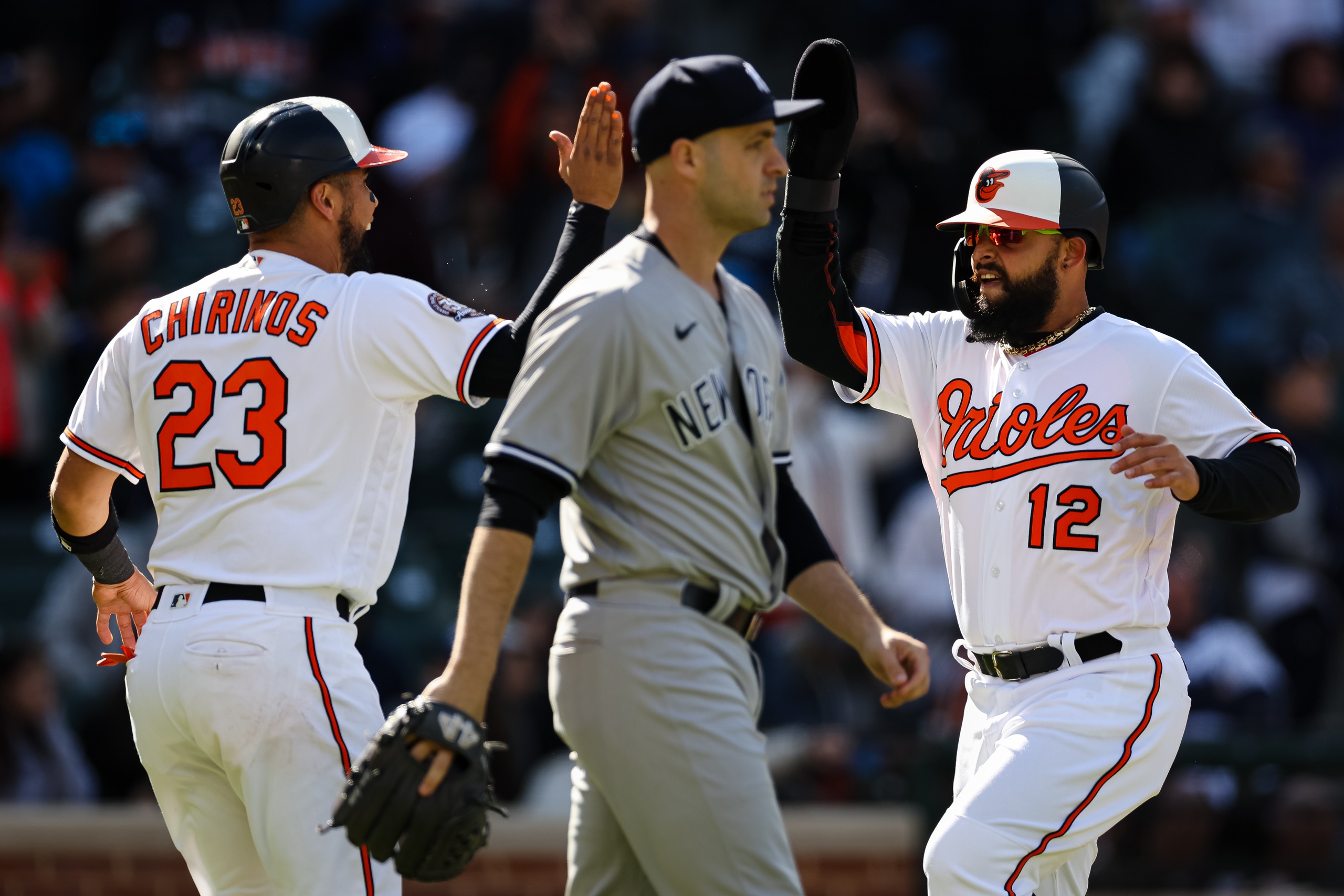 BALTIMORE—On a brisk Sunday afternoon, the Orioles struck out 12 times in just five innings against Yankees starter Nestor Cortes and failed to convert on a key scoring opportunity in the seventh inning of a scoreless game.

In the eighth, Rougned Odor, who had spent the first 7 ½ innings on the bench, came through with a key pinch-hit single, and the Orioles were on their way to a 5-0 win over the Yankees before an announced crowd of 25,938 at Camden Yards.

The Orioles (3-6) took two of three from the Yankees (5-5) as they prepared to begin a 10-game road trip to Oakland, Los Angeles and New York. It was the first shutout of the Yankees since September 3, 2016.

Ryan Mountcastle began the eighth with a single against Jonathan Loáisiga  (0-1). Trey Mancini walked and, after Anthony Santander lined softly to short and Cedric Mullins filed to left, catcher Robinson Chirinos walked on 10 pitches to load the bases.

“Robinson Chirinos won us the game with that at-bat,” manager Brandon Hyde said. “Puts together a pro at-bat there to get us a walk there, stay in the inning. That’s what good teams do throughout the order.”

Chirinos is batting only .167 and doesn’t have an RBI, but Hyde has lauded his work behind the plate.

“I was just trying to keep that inning alive,” Chirinos. “Trying to do whatever I can to compete against a really good pitcher.”

“That’s what we need to do more of, to be able to battle throughout an at-bat,” Hyde said. “That was really great for our guys to see. Just to put together an outstanding at-bat off a really tough reliever in a big spot in a game, a not give-in attitude.”

Odor pinch-hit for second baseman Chris Owings, who struck out in his three at-bats, and in all seven of his at-bats this season.

Odor singled to center, scoring Mountcastle and Mancini to give the Orioles a 2-0 lead. He credited Chirinos.

“Oh my God, that was the biggest at-bat, I think,” Odor said. “He took a lot of pitches to make him execute more pitches. He never gave up, he got the walk, and then I got the hit, but it was a big at-bat.”

Third baseman Kelvin Gutiérrez doubled against Lucas Luetge to score Chirinos and Odor. Shortstop Jorge Mateo singled, his third hit of the game, and Gutiérrez scored, and the Orioles who had been 3-for-29 with runners in scoring position in the series had three straight clutch hits and a 5-0 lead.

“That was our best offensive inning of the year because of Robby extending it,” Hyde said.

Cortes, who was once an overmatched, raw pitcher taken in the Rule 5 draft by the Orioles, struck out a career-high 12 batters in five-plus innings In the fourth inning, Cortes pitched an immaculate inning when he struck out Anthony Santander, Ryan McKenna and Chirinos on nine pitches.

“We had a lot of trouble with him,” Hyde said. “Give him credit. He pitched a great game. We matched it on the mound.”

Orioles starter Bruce Zimmermann pitched five scoreless innings, allowing four hits, striking out six and walking two. He was long out of the game when the Orioles struck in the eighth.

“I can’t tell you what the dugout was like, but I can tell you what the training room was like, it was pretty electric,” Zimmermann said. “You could see what was going on, how Nestor was pitching today. I didn’t realize how well he was pitching until I came out of the game. To be in there, to see the game keep grinding out at-bats … that’s the kind of thing that’s going to win us ballgames, and it’s exciting.”

New York employed four outfielders against Mancini in the third with Mateo on first and two out. They moved second baseman Gleyber Torres to left field. Mancini struck out.

In the sixth, Mancini lined to deep left-center and Tim LoCastro, who replaced Saturday night’s winning pitcher, J.P. Sears on the roster, made a sensational catch to rob him on an extra-base hit.

With two outs in the seventh, Gutiérrez beat out an infield hit and Mateo singled and stole second. Loáisiga struck out Hays.

Minor league update: Kyle Bradish (1-0) allowed one run on two hits in five innings as Triple-A Norfolk won the first game of their doubleheader against Scranton/Wilkes-Barre. Shortstop Richie Martin had two RBIs. The Tides had just three hits in the second game in their 1-0 loss to the RailRiders.

Shortstop César Prieto homered for High-A Aberdeen in their 3-1 loss to Wilmington.