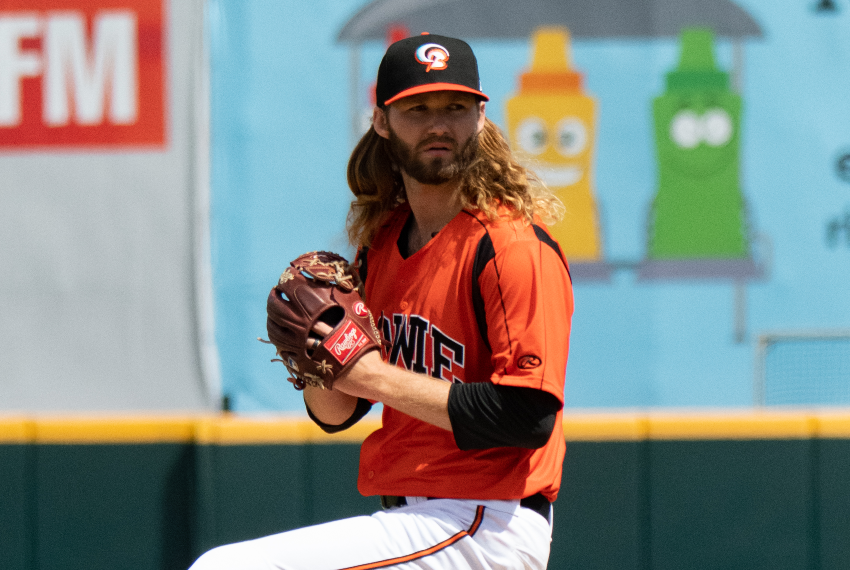 BOWIE, Maryland— Brandon Young acknowledged that he had jitters in his Double-A debut for the Bowie Baysox. They weren’t evident, however, as the 23-year-old right-hander from Lumberton, Texas, made an effective start.

Young allowed one run on five hits with five strikeouts and three walks in five innings in a 9-2 loss to the Richmond Flying Squirrels on Saturday. The Baysox allowed seven runs in the ninth inning on five walks and four hits.

“It was good to be back out there,” Young said. “It was fun to be with some Bowie fans. New place, new scenery, new team. I had a good time.”

Young gave up a homer to the No. 9 hitter Michael Gigliotti that gave Richmond a 1-0 lead in the third. He then walked the next two batters on 10 pitches, prompting a visit by pitching coach Josh Conway. Young got out of the jam with a popup in foul territory and a pair of strikeouts.

“I minimized the damage, and that’s what we’re looking for,” Young said.

Young’s fastball, which reached the high 90s, was his best pitch, but he had trouble commanding the curveball. The changeup and slider also were effective.

“Honestly, I just got the nervous jitters out of the way and felt good moving forward,” Young said. “I’m just glad to be here.”

Young is an interesting prospect. He went 3-5 with a 4.80 ERA as a junior at Louisiana-Lafayette in 2019, including a 13-strikeout outing against Arkansas State. The following year, Young went 3-0 with a 1.09 ERA and led the team with 37 strikeouts in four appearances in a pandemic-shortened season.

“I thought he threw the ball great just like we were expecting him,” Moore said. “He was landing three pitches and kept them off-balance. I wish we could have left him there longer, but this early in the season, you really can’t do that.”

Young could be a candidate to move to Norfolk later in the season, especially if the Tides have several pitchers promoted to Baltimore.

“He’s ready for this,” Moore said. “The jitters didn’t show up in a bad way because he had good stuff and was commanding the strike zone.”

The Baysox won one of three games against Richmond in the season-opening series.

Rodriguez excels: Norfolk starter Grayson Rodriguez, the No. 1 pitching prospect in MLB, had a stellar outing in his debut against the Charlotte Knights. After walking the first batter he faced, Rodriguez retired 10 consecutive hitters, including a stretch of five consecutive strikeouts. On the night, Rodrigez threw four scoreless innings, allowing one hit with seven strikeouts and one walk in the Tides’ 12-1 win.