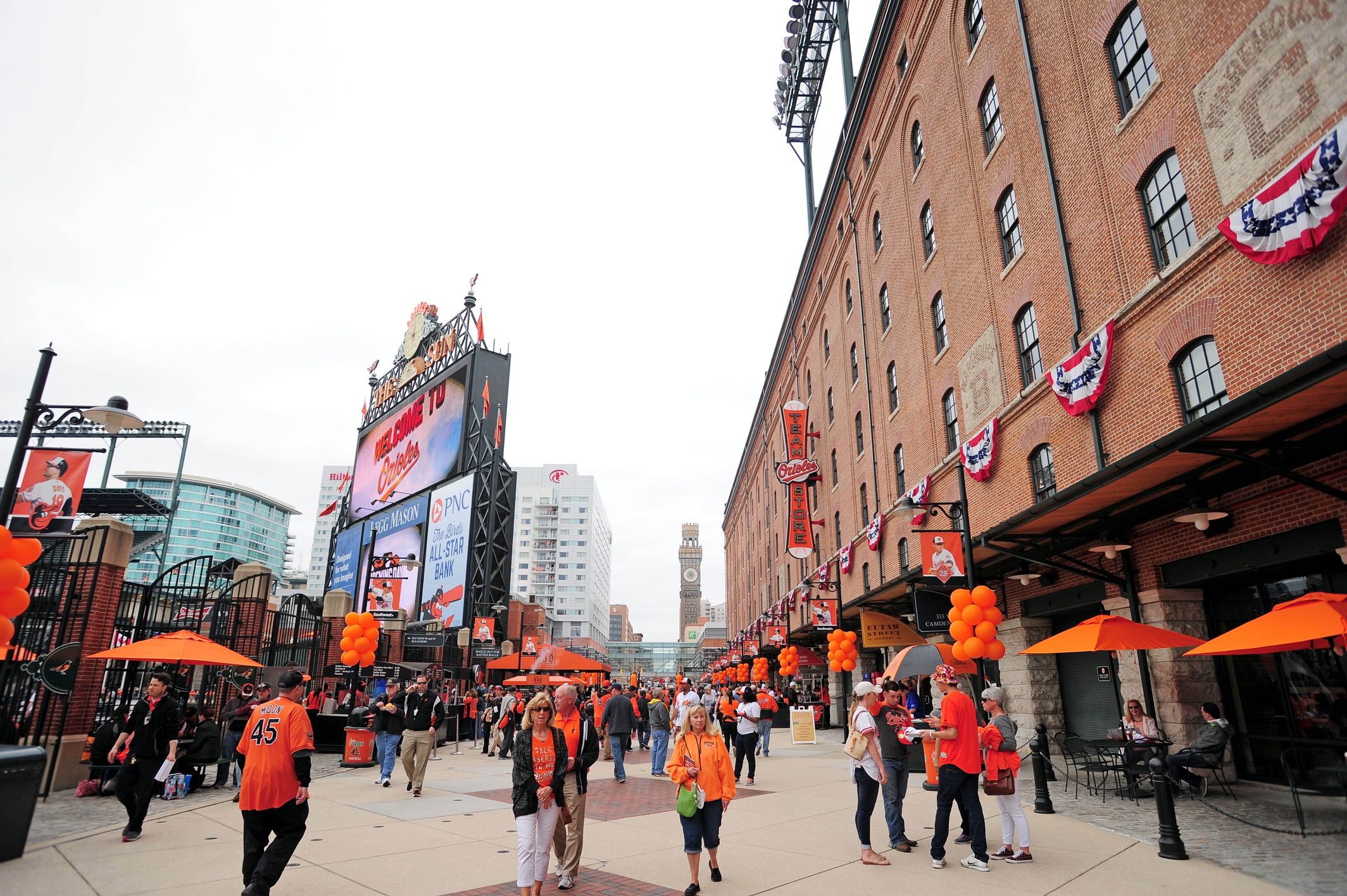 It’s time for the second part of our monthly mailbag, and we’ve gotten lots of excellent questions. Questions are edited for length and clarity.

Question: Triple-A and Double-A seem to be loaded. Do you think some prospects may be traded for better pitching and to lessen a logjam of prospects before the deadline? From: @BobWatk76881279

Answer: Bob, I think the Orioles have a lot of infield prospects, but I don’t think they’re yet in a position to trade prospects for more pitching. I think that time is coming soon.

Question: Can we expect a number of prospects to be on the team in addition to catcher Adley Rutschman. Will we start to see trades or will we continue to see waiver-wire additions for pitching? From: Julius Silvestri via email

Answer: Julius, I think this year you’ll see a number of prospects. Besides Rutschman, you should see pitchers Grayson Rodriguez, DL Hall and Kyle Bradish, and outfielders Yusniel Diaz and Kyle Stowers.

For now, I think they will rely on the internal pitching prospects, and they’ll always be active on the waiver wire.

Question: Can you ask Mike Elias what impact he thinks the new collective bargaining agreement will have on small-market teams. Does it make things tougher? From: @Nick_Verd

Answer: I wasn’t able to ask Mike that question, but I think that the new schedule with fewer games against the four difficult American League East opponents may make things easier on the team, Nick.

Playing 56, instead of 76 games in a season against Boston, New York, Tampa Bay and Toronto should level the division somewhat, and adding a wild-card team could help in the next few years.

Question: I believe that a salary floor would force all teams, especially those that do not spend, to spend more money, thereby pushing up all players’ salaries. I am interested in knowing the reasons why the players’ association did not like the salary floor and your thoughts on this issue. From: Dean Wilyman via email

Question: Do you think that the Orioles will be competitive in retaining their homegrown stars in the future? From: AZ Orioles Fan

Answer: I think that when they find a player, perhaps Adley Rutschman, that they think should be retained for the long-term, I think they will spend, but I don’t think they’ll be spending big money on an extension just yet.

Question: Who is your best guess to close games for the Orioles this season? From: Walter via email

Answer: Walter, I think Jorge López will get the most opportunities to close games for now. Dillon Tate and Paul Fry could get a chance, too. Had the Orioles taken a lead in Friday’s game, Joey Krehbiel would have gotten the call.

Question: Why aren’t television and radio broadcasters traveling with the team? From: Vince Celano via Facebook

Answer: A similar question was also posed by 5Brooks5. Vince, according to an article in The Athletic, the Orioles gave Covid concerns as a reason broadcasters are not traveling, but it also pointed out the team saved substantial money.I think it’s a bad decision for fans, the broadcasters and the team, and the guess here is that you’ll see them traveling later this season.

Question: Which position player besides Adley Rutschman do you think will get called up first? From: Timothy Stahm via Facebook

Answer: Timothy, my guess is that Yusniel Diaz is the likeliest player to get called up after Adley Rutschman is.

Question: Do you see any untested young arms that could explode onto the scene in the middle of the season? From: Jeff Fox via Facebook

Answer: Jeff, I think DL Hall is the best choice for a young arm who could make an impact on the team. I think Grayson Rodriguez is much more tested, and I think Kyle Bradish is, too.

Question: Which young pitcher will make the most improvement this season? From: Rick Little via email

Answer: Rick, I think Bruce Zimmermann, who will start Monday’s home opener, has the best chance. He showed well at times last year before he was hurt, and I think he has interesting stuff.

Question: Last year was a breakout season for centerfielder Cedric Mullins. Hopefully, he’ll come close to repeating a 30-home run, 30-steal season. Do you think any players could have a breakout season this year? From: Dave Gruber via email

Answer: Dave, I think outfielder Austin Hays, who played very well last September, is someone who could have an excellent season. If Hays produces, and some of the others at the top of the lineup do as well, perhaps the lineup will be unexpectedly productive.

Question: The Orioles have had pretty much the same uniforms for many years now, so I was wondering if there is any word on if they’ll be making changes to them in the near future? From: Brad Kerger via email

Answer: Brad, I have not heard anything about any possible changes to the uniforms, but it wouldn’t surprise me if they contemplate some in the next few years.

Question: We know the players who will likely be called up during the regular season.  But who are the dark-horse candidates that could be a surprise callup? From: Mike T

Answer: Mike, there are a couple of outside-the-box candidates for callups later this season. One is outfielder Robert Neustrom, who we saw early in spring training. Another is left-handed pitcher Kevin Smith, who, unlike Neustrom, is on the 40-man roster. Patrick Dorrian, a third baseman with power, is another. All three are at Norfolk.

Question: Seeing them at rock bottom in salary in MLB, Rich, do you perceive this as the general area that they’ll stay or will they be more aggressive in free agency in the coming years? From: Alan Riester via Facebook

Answer: Al, similar questions were posed by Jacob Shores and Mike Beale. I think the Orioles will continue to have a low payroll for at least another year. Their top prospects should be coming up in the next year or two, and they’ll be at minimum salary to begin. It makes sense that they would augment them with a free-agent plunge or two, but even if they do, they’ll probably remain in the lower-payroll tier over the next few years.

Question: I read that the competitive-balance-round pick the Orioles picked up from Miami in the trade for relievers Tanner Scott and Cole Sulser will also give general manager Mike Elias close to another million for the signing of draft picks. So maybe Baltimore will fall into what Pittsburgh lucked into last year, when highly regarded prospects like Anthony Solometo and Bubba Chandler were there in the second and third rounds. And maybe Elias will draft a Druw Jones or Termarr Johnson at 1/1, even if neither guy would give a discount to sign as the number one pick? From: Patrick Tracey via email

Answer: Another question about the draft was posed by Scott Defoy, who was eager to know who the Orioles might take with the first pick in the draft.

Patrick, I think accumulating high draft picks is important to Elias, and to answer Scott’s question, two of the players that Patrick mentioned, Druw Jones, a Georgia high school centerfielder who is the son of longtime Atlanta Braves centerfielder Andruw Jones, and Georgia high school second baseman Termarr Johnson are of interest to the Orioles. Florida high school outfielder Elijah Green is also an intriguing player, as is Brooks Lee, a shortstop at Cal Poly.

Question: Can you find anything about how folks here in Delaware can listen to O’s games on the radio?  I tried streaming on the WBAL app yesterday during the game and it says that you can’t stream games. I tried playing it on my Alexa device, that was not allowed either.

Is WBAL working something out with MLB or MASN to be able to stream a game?  I was never able to get an Orioles affiliate station the past couple of years here in Bethany Beach. I hope I’m not in radio wasteland. The O’s are going to be competitive (I didn’t say win a lot of games) this year and I don’t want to miss games.  From: John Lantz via email

Answer: John, the closest radio affiliates are in Salisbury (WTGM, 960) and Seaford (WUSX, 98.5), which are both about 35 miles away from Bethany. My suggestions would be to subscribe to Sirius/XM radio or MLB.TV. You can get the Orioles’ radio feed for home games and the opponents’ when they’re on the road with Sirius/XM, and you can get all the radio games with the MLB.TV subscription.

I know that you’d like to hear the games on terrestrial radio, and I can hope for your sake they’ll add an affiliate in Ocean City or Rehoboth.

Question: I was listening to Steve Phillips and Eduardo Perez on MLB Network Radio discuss the Orioles. Their opinion was that, while the Orioles are developing a number of promising young players, the team is probably another three-to-four years away from being competitive in the AL East. Do you agree with that bleak assessment, and if it is accurate will there be anything left of the Orioles fan base by then? From: Birdman via email

Answer: Joel, I think that if the Orioles’ young players can produce they can be competitive within the next two years, but several will have to be extremely productive, not just one or two.

Question: I hate to sound like a dinosaur, but I remember the days of four-man rotations, pitchers throwing 250-300 innings a year. It seems like organizations baby pitchers these days, with injuries seeming more common than ever. Do pitchers need to throw more? Have you ever discussed this with Jim Palmer? From: Greg Fuchs via email

Answer: Jim is an expert and very honest about the shortcomings of today’s pitchers. I would also like to see pitchers throw deeper in games. Fans come to the ballpark to see starting pitchers, but this year, with a shortened spring training, it seems unlikely that you’ll see even one pitcher throw 200 innings, Greg.