Owings makes a case for himself in Orioles' spring training; Stewart's on the mend - BaltimoreBaseball.com 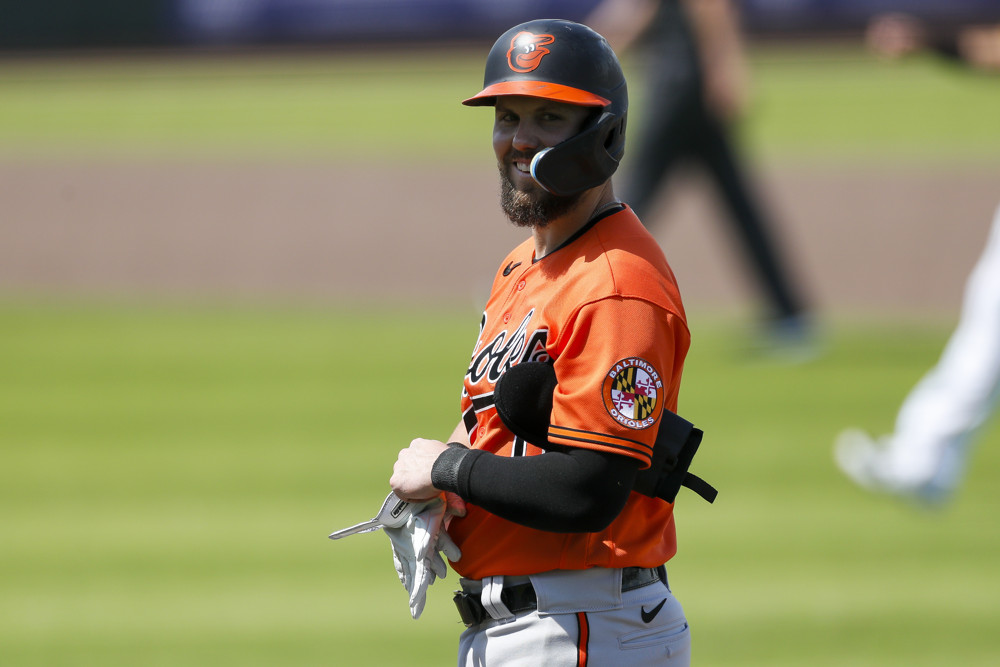 LAKELAND, Florida—It has been a good spring for Chris Owings. The 30-year-old utilityman signed a minor league contract with the Orioles on March 15th, just after training began, and he has demonstrated his infield versatility. On Saturday, he’s batting leadoff and playing second base in the Grapefruit League game against Detroit.

Owings can play second, shortstop and third, and the corner outfield positions. He has a strong chance of being with the Orioles when they open the season on April 8th against the Tampa Bay Rays at Tropicana Field.

The Orioles haven’t added Owings to the 40-man roster, but after hitting .316 (6-for-19) with a home run and four RBIs, that should occur before 28-man rosters must be set on April 7th at noon.

“Just waiting these last couple of days out,” Owings said. “Just got to keep playing baseball is what it boils down to.”

Owings, Kelvin Gutiérrez, who is starting at third base on Saturday, Ramón Urias, the shortstop, and Jorge Mateo, who isn’t on the trip, are contending for spots. So is Richie Martin, who’s not on the 40-man roster, and Rougned Odor, who has been used exclusively at second this spring.

The Orioles are planning for 13 position players, making it possible for Gutiérrez, Mateo, Odor, Owings and Urías to make the team.

“Chris Owings is a good player,” manager Brandon Hyde said. “The versatility aspect that he brings is huge for us. He can play three spots in the infield. He’s played center field in the big leagues before. He’s played the other outfield positions. That’s really helpful. He takes a really good at-bat, so I’m just going to continue to move him around these last four or five days.”

Owings hasn’t played the outfield this spring, but he’s played there in a nine-year major league career with four teams.

“We don’t have a whole lot of veterans on our team, and somebody that’s been around for a while, playing multiple positions, that experience factor is important,” Hyde said.

Owings played just 17 games last season with Colorado because of two left thumb surgeries. He played winter ball in the Dominican Republic to get himself back into shape.

“The injuries, everything that I was working on, I was able to go there and test it out, so coming into camp, I felt good, I felt healthy,” Owings said. “I was probably one of the guys that benefited from the lockout, to go home and rest a little bit, to have a little break from winter ball because it was tough down there. I played like 22 games in a row … I got a lot of at-bats. I feel good coming into camp. I feel healthy.

“If you looked at me this spring, I’ve moved around the infield. I’m going to play the outfield here in a couple of days.”

“This last week, you’re usually kind of winding down,” Owings said. “You’re really focused on just getting your guys ready, getting at-bats and getting in that game flow. But now, we’re still, like, ‘Hey, we’ve got some stuff to work on, right?’ Whether it’s defensive stuff, some baserunning, we’re trying to get some stuff in before camp breaks. You’re still getting your work in in the morning time where sometimes later in spring, it’s just ‘show up and play’ and get in that game routine …

“When I played winter ball, I played five innings, got some at-bats, and boom, I was in the game the next day. I told Hyder that this was a nice, gradual entry into playing … It’s the same spring that you’ve always done, just a little shortened.”

Stewart update: Hyde said that outfielder DJ Stewart is getting closer to a return. Stewart’s third finger on his left hand was bruised when he was hit by a pitch while swinging on March 23rd. Stewart was scheduled for at-bats on a back field at Ed Smith Stadium on Saturday.

“If that goes well, I’m hoping in the next day or two, he’ll get a little game action,” Hyde said. “If everything goes well today, maybe tomorrow, maybe the next day. Playing it by ear right now, but hopefully today goes well.”