Uvila hopes a big league career with Orioles is in the cards - BaltimoreBaseball.com 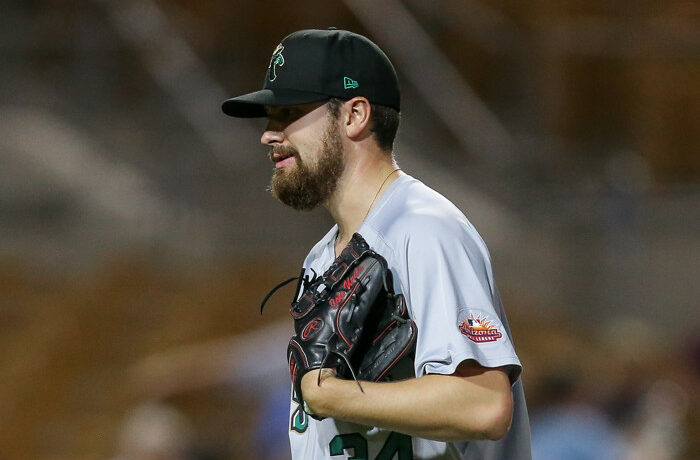 Last December, the Orioles selected pitcher Cole Uvila in the minor league portion of the Rule 5 draft. The 28-year-old right-hander was an unlikely choice and is an even unlikelier major league prospect.

Uvila wasn’t taken in the 2018 major league draft until the 40th and final round by the Texas Rangers. Few 40th-rounders ever get to the major leagues. Many aren’t even signed.

Not only was Uvila taken in the final round, but he was 24, two or three years older than most college prospects. Uvila was grateful to be selected and signed for the minimum allowable bonus, $1,000, “It was about $700 after tax,” he said.

He pitched two years for Georgia State,  a school in downtown Atlanta before he needed Tommy John surgery in 2016, costing him the 2017 season. Uvila pitched in 2018 for Gwinnett College in Lawrenceville, a NAIA school in suburban Atlanta that’s never produced a player taken before the 10th round.

Uvila did well in the lower rungs of the Rangers’ organization and played in the Arizona Fall League in 2019 before missing 2020 because of the pandemic.

About a week before the minor league Rule 5, Uvila was told he hadn’t been unprotected.

“I’m probably one of the better arms in the minor league section and to be ready to go,”  Uvila said he was told. “I kind of had an idea.”

The loss of the 2020 season was particularly hard for Uvila because he was 26.

“It sucks to lose a whole season, especially being older,” he said. “You can’t really afford to lose many years when you’re as old as I am. It’s life. I was able to work out a lot of things and make the most of my time. At the end of the day, it wasn’t the worst thing. It could have been a lot worse.”

Double-A went well for Uvila in 2021 but Triple-A was difficult.

“I just felt bad. The hitters were much more disciplined. They make you pay for your mistakes. They’re just better. My head was spinning a little bit. I’d had so much success at the lower levels that when you, all of a sudden, run into a lot of problems like I did you start questioning yourself.

“That’s where the growth comes from. It was a rough two months, but I was glad it happened to me, to be honest. It really made me reevaluate where I’m at and what I need to do if I want to go back to Triple-A and not let it happen again.”

Uvila is in his first few days with the Orioles at their Twin Lakes minor league camp.

“A lot of the players recognize that I’m a new guy,” Uvila said. “They’ve been really good about getting to know me a little bit. All the personnel I’ve talked to are energetic and excited to be here. That’s where I’m at, too. It seems like a great fit so far. They’ve done a great job … making me feel wanted and welcome, and that they’re excited to have me.”

At 28, he’s determined to make an impression.

“I never really imagined making it this far,” Uvila said. “When you’re 24 years old and you’re playing at an NAIA school with a [4.75] ERA, you definitely don’t envision what ended up following all that.

“It’s about having fun, but at the same time I’m a very competitive person. I expect a lot of myself. At this point, making it as far as I have, I’m going to do everything I can to keep playing as long as I can.”

In the offseason, Uvila lives in Kent, Washington with his wife, Kayla, a behavioral therapist who works with autistic children.

Uvila didn’t make enough money with his signing bonus to live comfortably in the offseason and relies on poker, which he began playing seriously after his Tommy John surgery.

“You’re just sitting around in a brace,” he said. “I really invested a ton of time in studying and getting good at poker.”

Since then, Uvila plays Texas Hold’em in the offseason.

“It’s not glamorous. There’s not a massive amount of money in it,” he said. “It pays the bills and lets me focus on something other than baseball all the time.”

There are plenty of card players in the minor leagues, but Uvila won’t play with them.

“I don’t want to hustle those guys,” he said “I let them know ahead of time that I’ve had some success. They typically aren’t interested.”

Robertson, who played with Uvila in the Texas organization, was 6-3 in 63 games with a 5.70 ERA with the Rangers and Reds minor league systems. He attended Washington College in Chestertown, Maryland.