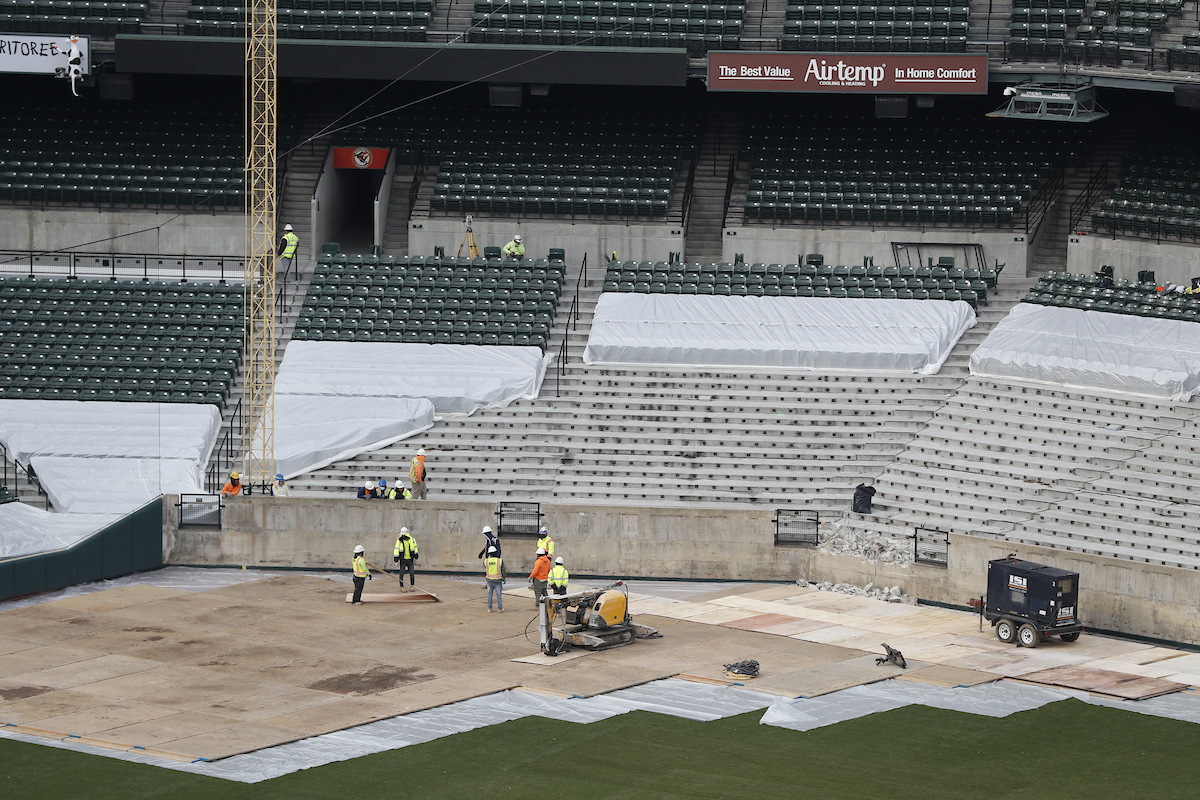 It’s time for the second part of our monthly mailbag, and we’ve gotten lots of excellent questions, which may be edited for length and clarity.

Question: How many home runs will be hit with the change in field dimensions? From: Harvey Kimbrough via email

Answer: Harvey was one of a number of readers who asked about the Orioles raising the left-field wall from about 7 1/2 feet to 13 feet and increasing the distance to left-center field by about 26 ½ feet. Also asking were @JohnnyCopeland, Tim Lyden and Marty Adams.

I’m looking forward to some quirks and lively discussion because I don’t know the answers, but I think the changes will be fun.

Question: Is there any indication of potential changes to the bullpen or center-field dimensions in the future? These alterations and the rationale behind them make lots of sense. However, I can’t help but feel the odd dimensions between left field and center field pose injury risks to aggressive leftfielders like Austin Hays.

A future change to the bullpen/center-field area that has the bullpen pushed back would allow a more streamlined fence or at least a more gentle grade between left and center field. From:  Dean Wilyman via email

Answer: Dean, in his Zoom call last Friday, general manager Mike Elias didn’t mention any plans to alter center field or the bullpens. He did allude to changes to other parts of the ballpark that could occur over the next few years but said he’s not involved in those.

Question:  When do you think Elias will be expected to field a winning team? I’m not getting any younger and the product he’s put on the field has been terrible. I also think it’s folly to expect to become a contending team based solely on your drafts. You need to spend some big money on free agents. What do you think O’s fans have to look forward to in terms of how long it will take to be a contender again? From: David Gruber via email

Answer: Dave, I think that 2022 and 2023 will be big years for Elias and his vision for the ballclub. I think that by the end of 2022, while the record might not improve dramatically, fans might be pleased when they see some of the young prospects. Their maturation and the addition of more in 2023 should show progress.

I’ll be eager to see what strategy they’ll pursue once the lockout is lifted, and if they’re more aggressive in the trade and free-agent market after the 2022 season.

Question: Can you provide insight or ask current ownership if there are plans to sign homegrown impact players to long-term contracts before they reach free agency? From: George aka Mtairyordge via BaltimoreBaseball.com comments.

Answer: George, it will be fascinating to see if the Orioles attempt to sign catcher Adley Rutschman to an extension early in his career, as other teams have done with top prospects. I’m also eager to see if there will be a move to extend Trey Mancini once the lockout ends.

Question: The Orioles lost more than 100 games in three of the last four years.  The attendance has dropped dramatically. The best catcher available for Opening Day is Adley Rutschman by far. Don’t you think that Oriole management should start their best players on Opening Day. Wins Matter. From: Mitch via email

Answer: Mitch, if the service time provisions in the new Collective Bargaining Agreement remain the same, and the Orioles could control Rutschman for another year if he remains in the minor leagues for a few weeks, then I think it’s possible he’s not here for Opening Day. If those provisions are lifted, I think there’s a better chance Rutschman is here for Opening Day.

In any case, I think you’ll see plenty of Rutschman in 2022 and beyond.

Question: Where do you think Sig Mejdal’s analytics have made the biggest impact? From: Georgia Oriole via BaltimoreBaseball.com comments

Answer: Georgia, the Orioles’ analytics department work isn’t shared with us, so I can’t be specific on individual players or a position group. I did find it interesting that Sig was on the Orioles’ Zoom call with Mike Elias on Friday to explain the change in park dimensions. Since that was the biggest offseason news in Elias’ three years with the team, I’ll go with Mejdal’s influence on changing the dimensions.

Question: With the new radio contract going to WBAL, will there be any changes in the on-air talent? From: Vince C via BaltimoreBaseball.com comments

Answer: Vince, Geoff Arnold, Kevin Brown, Brett Hollander and Melanie Newman are expected back for 2022, although their roles and number of games hasn’t been announced.

Question: Now that it appears Matt Wieters’s playing career may be over, do you have a feel for whether coaching might be of interest to him? I think Matt would succeed as a coach. From: RegularEd via email

Answer: Ed, you and I agree. I thought when Matt was playing he’d make a fine coach or manager, but like a number of players whose careers have recently ended, he might prefer to be at home for a few years because he has small children.

I wouldn’t be surprised to see him as a major league coach in the near future.

Question: Buck liked his guys. Any chance he will have his GM reach out to the O’s on a deal for Mancini? He also has kept an eye on Cedric Mullins’ progress. What could the Mets offer to entice the O’s to consider trading either? Any other former Buck guys be of interest to him for trade consideration. From: Bill Connor via email

There aren’t many Orioles left from Showalter’s last 2018 team, and one of them, relief pitcher Miguel Castro, is already on the Mets.

Question: Could you explain who determines the “slot values” and player rankings used in the MLB draft and what actual effect they have on players’ salaries?  I often hear Team A is taking Player X with pick number 3, for example, when he is rated to go, say, pick number 8.  Supposedly, the team won’t have to pay him as much as if they had chosen the player rated number 3, thus saving them money to use on other picks who may have other options: e.g., returning to college.

Unless he already graduated from college and lost much of his bargaining power, why wouldn’t Player X or his agent say obviously he is the number 3 player and will not sign for number 8 money? From: Clif Watts via email

Answer: Clif, MLB determines the slot values and they are suggestions and not hard rules. But if a team exceeds their total pool for all players signed, there are penalties.

No player knows for certain that he would have been taken with the eighth pick instead of the third one, and the certainty that they’ll be taken along with a little extra money can be convincing. Generally, teams speak with players and their agents before making these picks and, unless they’re convinced a player is amenable to their strategy, they won’t draft them.

Question: How did the O’s player payroll compare to the rest of its American League East competitors in the years we made the playoffs and/or World Series? I’m really curious about the Earl Weaver years.  It seems like the discrepancy is greater than ever right now — and a high hurdle to overcome. From: Glenn Fuller via email

Answer: Glenn, there wasn’t free agency during most of the Weaver years, so that’s not a fair comparison.

Question:  I know Chris Davis retired, but was there a buyout or do the O’s owe the balance of his contract? From: Robert Bethards via email

Answer: Robert, according to Cot’s Baseball Contracts, Davis will receive $17 million, his non-deferred portion of his 2022 salary, over the next three seasons instead of this year.

Question: What veteran starting pitchers are the Orioles considering once the lockout ends? From: James Warren via email

Answer: James, I don’t know which veteran starting pitchers the Orioles are considering, but I wouldn’t be surprised if they added another one, perhaps to a minor league contract. They will make their signing of Jordan Lyles official once he passes a physical after there’s a new Collective Bargaining Agreement.

Question:  I may be proved wrong about this, but why are the major leagues and their teams seemingly divesting from minor league teams.  And why are they investing more heavily in the Caribbean.  I like talent, and perhaps that is where you get more bang for the buck, too.  Why not invest in college teams and better scouting? From:  Frank Friedman

Answer: Frank, MLB made the decision to drop a full-season minor league affiliate from each organization as well as short-season leagues. For the Orioles, they elected to make Aberdeen their High-A affiliate and drop Frederick.

I was sad to see Frederick leave the Orioles’ organization. MLB felt that it was more economical to devote their resources to players who they thought had a better chance to play in the majors.

I wasn’t in favor of MLB’s decision because I think it deprived smaller communities of professional baseball, and the game needs those areas as well as the larger ones in order to grow.

Baseball isn’t as popular with younger people in the United States as it was decades ago, and fewer colleges are fielding teams because of that lack of interest. It’s enormously popular in the Dominican Republic and Venezuela, and baseball is looking there because athletic young people there aren’t playing football or basketball.

Question: What is the significance of August 6th for 30 years of Oriole Park at Camden Yards? Why not start the anniversary at the beginning of the season instead of almost toward the end? Will the Orioles commemorate 30 seasons with a jersey patch like they have for previous anniversaries?  From: Mark in Charlotte via email

Answer: Mark, the Orioles will celebrate the park’s anniversary throughout the season and will wear a 30th anniversary patch. The club has regularly used early August to have its Hall of Fame induction and celebrate anniversaries.

Question:  How difficult is it as an Orioles beat writer to provide honest and sometimes negative assessments for the current brass and players? Are you hesitant to make such assessments for fear of curtailed access to the team? From: FireEliasNow via BaltimoreBaseball.com comments

Answer: Joe, as a member of the Baseball Writers’ Association of America, I have the same access as the other BBWAA outlets that cover the Orioles.

I strive to be fair to everyone, those I interview and especially our readers.